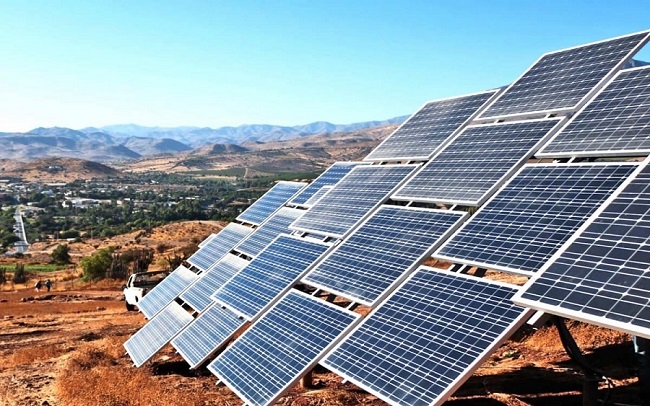 The $70 million factory, seen as a good Foreign Direct Investment, will be located on a 60,000 sqm area at the Oore Industrial Park.

Although Nigeria has been generating electricity in commercial quantities over time, the pace of electricity infrastructure development in the county is very slow and power supply remains highly inadequate.

According to Enterprise Surveys Data, after a lack of access to finance, Nigeria’s unstable electricity is the second biggest obstacle to doing business in Nigeria.

Solmont Technologies said it is set to contribute towards changing this narrative.

Speaking at the official groundbreaking ceremony of the Oore Industrial park by Governor Rotimi Akeredolu, a director at  Solmont Technologies Nigeria Ltd, Patrick Tolani said the ease of doing business in the state attracted them to site the business at the park.

“Ondo State was the first state that offered the land. The governor of the state was very friendly. And while some states might be pushing, he pulled to himself. Imagine a scenario where we discussed the matter on Saturday and the chief executive of the park called on Monday morning and said, ‘I learnt about your discussion and I’m calling to follow up. That showed seriousness to us. We got the land allocation within that week.

“The ease of doing business in Ondo State decided it for us. The fact that there is a massive industrial park where the government is asking people to come and invest.

Investors love to hear such messages. The people we have related with in the state have been helpful,” he said.

According to him, the launch of the Economic Sustainability Plan (ESP) by the Federal Government provided an opportunity to build the business.

According to the plan, this will increase the stock of affordable energy by providing solar power to rural communities that have little or no access to the national grid.

Private sector installers of solar systems will also be supported to access low-cost financing from development finance institutions and the CBN in order to install solar systems at an affordable price.

“For me, there came this compulsion because the president of the Renewable Energy Association of Nigeria announced a committee that would work with the Federal Government and other relevant agencies to ensure the success of this project. I was the chair of the committee. I started interacting with the office of the vice president, the Rural Electrification Agency and I noticed that while everyone was talking more about the downstream, the upstream was not often mentioned and I felt if there is anybody that could use my global experience to see what I could do to bring people who have the expertise to partner with us to start manufacturing these components in Nigeria, I should be the person.

“The requirements for the 5 million solar homes system upstream category is that 70 per cent equity of the company must belong to Nigerians in order to benefit from the fund. It was a tough sell but our colleagues agreed to it.

“Our plan is to produce 1,000 MW of solar panels in a year which is about a quarter of the entire electricity available on the grid.

“In the Nigerian renewable energy industry, most of the components are imported. The fact that we will be producing locally is a big win for us. Our products are designed with the climatic conditions of Nigeria in mind. This means that the functionality is going to be at the optimal level to deliver better results for our users.

“The plan is to produce solar panels, batteries, inverters among other components. There is also a nanotechnology that we are working on. Once it is sprayed on the panels, it won’t need cleaning. It is both anti-rain and anti-dust. What that does is that it boosts the generation capacity of the solar panels. It is proven that the technology can boost generation by more than 35 per cent,” he added.

While speaking, the governor called on other investors to tap into the opportunities in the state.

“I want to use this opportunity to make a clarion call to would-be investors, that Ondo State is the haven for industrial development and Nigeria’s Hub of Investment opportunities,” he said.