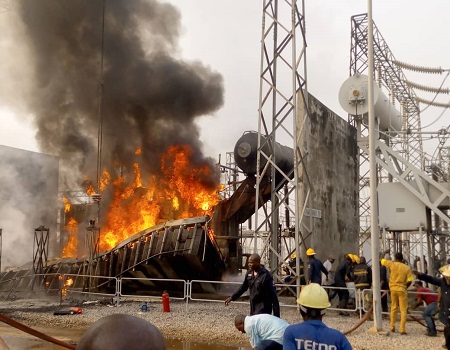 Fire, on Wednesday, struck the Ayede station of the Transmission Company of Nigeria (TCN) in Ibadan, Oyo State, burning completely Transfomer 1B, 150 mva, 330KV/132 Kv located inside the station.

The development may bring power outage in the whole of Oyo State and some parts of Ogun and Osun States.
The inferno, which started at about 7.00 a.m., was said to have been as a result of a power surge, leading to sparkling. The transformer was still burning as of 7.30 a.m.

Despite the combined efforts of the fire servicemen, it was difficult to put out the fire because of the large volume of transmission oil in the transformer.

Nigerian Tribune learnt that the transformer had over 500 drums of oil when the fire started.
Workers and other sympathisers joined the men of the fire service in the efforts to put out the fire and to prevent it from extending to the three other transformers beside the affected one.

Apart from deploying their firefighter vehicles, the private organisations also brought tankers to supply water into the vehicles already being used to fight the fire.

Speaking with newsmen, Abioye Oluwaseun, assistant superintendent in the Federal Fire Service, said, “we have been here for some hours now, we are damping down now but thank God for the contribution of the state fire, sweetco, the situation is under control.

“The fire might have been as a result of bridges from the major grid of supply in Ibadan. We were informed late but we are doing everything possible to put out the fire.”

In the same vein, the state director of Fire Service, Adeoye Moshood, said: “This is a transmission station, the liquid content that the transformers were using are highly volatile and this is actually what happened. Maybe the machine overworked and when a machine is working and using highly flammable content, there is the possibility of spontaneous ignition occurring.”

The state Commissioner of Police, Shina Olukolu, during his visit to the scene, said the essence of the security presence was to ensure that lives and properties were protected.

The Chief Operating Officer, Ibadan Electricity Distribution Company (IBEDC), John Ayodele, who was also on ground, said: “Right now, we cannot be talking about what caused it, but I think the first line of defence is to make sure the fire is put out so that it does not affect other transformers.”

He added that “for now, this transformer is part of the four transformers that are serving Oyo and Ogun States, especially Ibadan, Iseyin, Sagamu, Ijebu-Ode, and some parts of Osun State.

“I am sure TCN will commence investigation as to the causes of the inferno but what we need now was to put the fire under control.”

Authorities of the TCN, however, allayed the fears over the fire incident, promising that power supply would be restored to Ibadan on time.

Speaking through the Head, Transmission Service Provider (TSP), Victor Adewunmi, he said power would be restored on time because there were three other transformers in the station.

“The security men alluded to the fact that when it started as a small fire and they rallied round. Unfortunately, before they could do that the fire escalated and the whole transformer was engulfed in fire.”

He, however, said the TCN was working hard to ensure that such an incident did not occur again.

“By the grace of God, by the end of today (Wednesday), we are going to restore supply back to Ibadan,” he said.