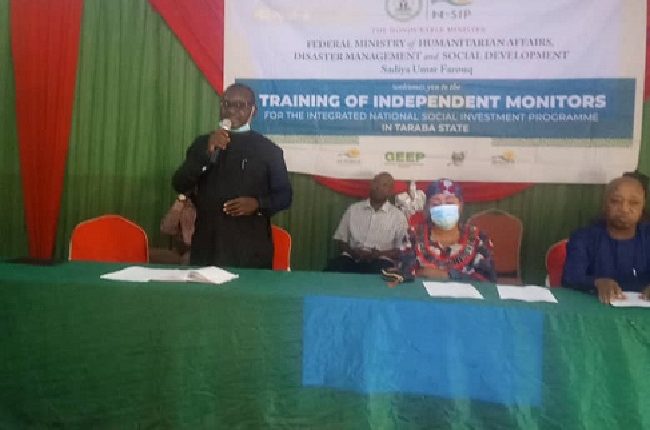 The Federal Ministry of Humanitarian Affairs, Disaster Management and Social Development, on Monday, commenced training of Independent Monitors for the National Social Investment Programme in the state.

The Hon Minister in the ministry, Hajiya Sadiya Farouq, who flagged off the training urged the monitors to pay attention to training so as to successfully carry out their assignment at the end.

Farouq told the monitors that President Muhammadu Buhari was totally committed to using the social investment programmes in lifting 100 million Nigerians out of poverty in the next three years, urging them to be committed to making it a reality.

Represented by the Chief Administration Officer of the Ministry, Mr Silas Wuya, Farouq congratulated the trainees on their selection as monitors of the programme in Taraba.

“I want to urge you all to pay attention to the training so as to succeed at the end of the day in doing the job well for the benefit of the people of the state,” she said.

Kichina commended the minister for coming up with laudable policies that were very beneficial to the people of the state and the nation.

She charged the monitors not to compromise when they eventually commence the assignment after the training for the good of the people of the state.

The Taraba Director, National Orientation Agency (NOA), Mr Bitrus Nyaama,  noted that the agency would continue to monitor everyone involved in the social investment programme including the independent monitors to enhance success.

The surprise visit made on Friday night by the leaders of the ruling All Progressives Congress (APC) to former President Goodluck Jonathan at his residence in Abuja triggered a stir in the major political camps, resulting in at least four possible theories..FG flags off training of monitors for social investment programmes in Taraba

Nigeria to establish jute bag industry for easy export of cocoa, others