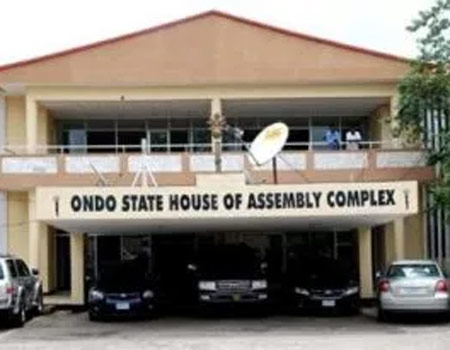 There was palpable tension at the Ondo state House of Assembly complex, in Akure, the state capital, on Monday, as some people suspected to be political thugs laid siege at the Assembly complex.

The fierce-looking men numbering over 100 arrived at the Assembly complex around 9 am and stationed themselves at the main entrance of the complex with scores of vehicles parked on the road leading to the state Assembly.

According to some workers and officials of the Assembly said the invasion of the House by the suspected political thugs might not be unconnected with the plans of some suspended lawmakers to resume to the office today after a court injunction.

One of the workers disclosed some of the suspended lawmakers have vowed to return for their legislative duties as directed by the Court of law, while some people are against their return to the hallowed chamber.

He said some of the suspended lawmakers planning to return to the Assembly are the target of the hoodlums.

However, men of the state Police command who have been drafted to the Assembly complex, preventing the hoodlums from entering into the complex as they mounted barricades at the entrance of the complex.

5 ways to overcome the fear of public speaking