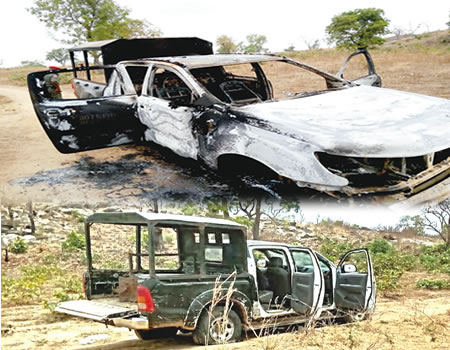 ADELOWO OLADIPO writes that the activities of bandits and criminals in Niger State have not abated as they continue to attack communities round the state wreaking havoc everywhere they go as just many residents are currently taking refuge in safer communities.

DESPITE apprehension over the spread of coronavirus across the country, and different measures put in place by Niger State government to contain the spread of the disease though no case has been reported as of the time of writing this report, armed bandits, kidnappers and cattle rustlers have not stopped wreaking havoc on residents of local communities in the state.

For quite some time, local communities in Niger State have literally been sleeping with only one eye closed due to general insecurity brought about by activities of the criminals. Shiroro Local Government Area of Niger State, a predominantly agrarian community is one of the areas where criminals are basically on the loose, kidnapping and raping housewives and young girls, among other criminal activities.

Over time, incessant violent attacks by the bandits on residents of the once peaceful community have resulted in death of hundreds of people; thousands of others have been rendered homeless, while properties estimated at several millions of naira have been stolen or destroyed, including payment of ransom running into millions of naira.

However, the situation assumed a more dangerous dimension in the early hours of Sunday, March 22, 2020 at a village known as Polling unit or Ward Centre of Galadima Kogo, a community in Shiroro council area of the state, following the killing of 17 mobile police operatives and 12 military officers who were all on a joint security patrol of the council area. Three unidentified others who were civilians also lost their lives in the attack.

Arewa Live learnt that the security men had received a distress call from their Zumba community base over the kidnap of some women and underage children who were about eight in number. Report said that at that time the abducted persons were being taken to some unknown destination(s).

They security personnel were said to be on the trail of the criminals when they ran into an ambush during which there was a gun duel leading to the killing of the security officers.  It was learnt further that the joint military and police patrol team had gone after the bandits in a motorcade of three Toyota Hilux vans as well as some motorcycles to rescue the women and children. However, unknown to the security personnel, the bandits who were said to be on motorcycles ahead of the security men had hidden their bikes on the foot of a hill in the area.

The criminals subsequently climbed the hill barefoot and hid somewhere in the forests with a view to taking the security personnel unaware after sighting them from a vantage position on the hill.   It was reported that as soon as the security men came into sight they were bombarded with gunfire from the bandits. The exchange of gunfire reportedly lasted several hours after which some of the bandits and the security men died.

Arewa Live learnt further that not only did the bandits overwhelm the security operatives; their arms and ammunition were also taken away with their vehicles and motorcycles set on fire. The bandits also took away their colleagues who died in the shootout.

The remains of the military and police personnel and those of the three civilians were evacuated the following day, Monday, March 23, 2020 by police and army authorities to the mortuary section of the Babangida Specialist Hospital, Minna and the General Hospital Mortuary department, Minna, before they were buried.

A source close to the community, Mr. Peter Kaburu, who is the chairman, All Progressives Congress (APC) in the local government area, added that the bandits also raided Goffaa community in the area while being pursued by the security operatives before a four-hour gun duel took place.  He also said displaced villagers had migrated to Zumba, a nearby community in the area.

A group under the auspices of Concerned Shiroro Youths also informed Arewa Live that attacks by bandits were not new in the area as all the eight political wards on the Lakpma axis of Shiroro Local Government Area of the state have come under one form of attack or the other in recent times, adding that as of December 9, 2019, a total of 41 communities in eight political wards had been attacked at different times.

The group whose spokesman identified himself as Bello Ibrahim, and the president of Progressives Youths Forum, stated that the attacks exclude other forms of attacks on other communities from December 9, 2019 till date, Ibrahim added that while residents are relying on God for their protection, it however appeared that the state government was incapacitated in decisively dealing with the criminals, noting that insecurity in Shiroro Local Government has taken a new dimension.

“The criminals are emboldened and there is palpable fear across the local government area and until peace is restored, our sentiments will remain that the government is not doing enough,” he told Arewa Live.

He said he was convinced that the state government was not willing to tackle the problem of insecurity headlong, adding that no group of criminals could be bigger and better equipped than government forces.

The youths also accused Governor Abubakar Sani Bello of not knowing the pains that people go through, adding that it was better imagined going by the reports received on a daily basis. The group also lamented the governor’s inability to visit the area despite the people’s numerous outcries, adding, “we are by these actions compelled to ask that if Kuta Internally Displaced Persons Camp was a political ward /unit that would determine his political victory at the polls, would he look the other way or send his deputy to campaign for him?”

However, in a reaction, Governor Bello said that henceforth there will no longer be any dialogue between armed bandits and the state government.  He said, although  reports about the attacks  against the security personnel have been unclear, the suspects who masterminded the heinous crime  would not go unpunished as government would do everything within the ambits of the law  to bring the bandits to justice.

“We are working together with governors of the North-West states. Security agencies are making progress in tracking and identifying the locations of the criminals and very soon such locations will be verified and attacked,” he assured.

Why I can’t have kids yet —Burna Boy