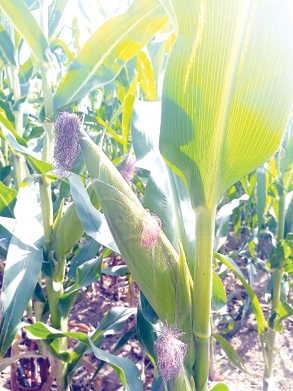 Nigeria’s maize production is under threat following some emerging pests, diseases and climatic conditions which has greatly affected production. The Institute of Agricultural Research (IAR) recently developed the TELA maize which appeared to be the game-changer. COLLINS NNABUIFE was in Kaduna for the ‘Seeing is Believing’ tour on the TELA maize farm. He reports.

NIGERIA is the largest producer and consumer of maize after South Africa in the African continent. In 2019 Nigeria produced 18 million metric tonnes of maize.

However, production constraints such as drought and insect pests among others, are hampering yield increased productivity for maize cultivation in Nigeria to meet the growing demand of the population for food and feed for industries.

In Samaru, Zaria in Kaduna State, the ongoing research on a transgenic maize called TELA, which is water efficient, drought tolerant and also fights insects and pest such as fall armyworm, has progressed significantly at the research farms of the Institute for Agricultural Research (IAR).

This new maize variety which was developed to resist pest and withstand drought is undergoing its third Confined Field Trials (CFT) at the research farms of the Institute for Agricultural Research (IAR), Ahmadu Bello University, Zaria.

The devastating effects of pests, especially Fall Army Worm (FAW) on maize farms has left Nigerian farmers helpless as they lose over 80 per cent of their investments.

Also, the Nigerian government has spent billions of Naira to curb the devastating effect of armyworm. Just in 2017, the government said it needed N2.9 billion to fight the pest.

But from the findings from the first and second phase of the trials it showed that maize farmers stand to benefit greatly when the maize is commercialised as it will save farmers production cost up to hundreds of millions of naira from pesticides spray to control stem borer and the Fall Armyworm.

Mohammed Saliu, Chairman Maize Farmers Association of Nigeria (MAAN), Kaduna state, said farmers have been looking for this kind of variety for a long time.

Saliu said considering the kind of land in Nigeria and the climatic condition, TELA maize would be the game changer in maize production.

“What the IAR is doing now will certainly assist the farmers greatly, because for long, we have been looking for this kind of variety that will assist our farmers.

“Considering the nature of land and environment that we have in this country, we will like to have this kind of maize. Am quite sure that if this maize is distributed to our farmers, it will help our farmers to get more yields compared to the one they are using currently”, he said.

Furthermore, Saliu said maize farmers have been battling with an average of 4 to 5 tons per hectare from the variety they use, but with the TELA maize, they are hopeful of getting about 8 tons per hectare which almost double of their initial harvest.

The main objective of the TELA Maize Project, according to the Principal Investigator of TELA Maize, Professor Adamu Rabiu, is to make drought-tolerant and insect-pest protected maize available and affordable to smallholder farmers in Sub-Saharan Africa.

Another maize farmer, Munkaila Garba said the TELA maize has solved the problems of low yield, Drought and pest for the maize farmers.

He said maize farmers in the country will not expect failure as the plant the maize, because majority of the challenges they face on the field has been addressed.

“This maize will assist us in so many ways because the problem farmers is drought, pest, disease and variety and this organization (IAR) has come up with a solution, so you can see that there is a great achievement in the program and for farmers.

“We will never expect failure by using this technology in farming, especially maize as we understood it here, so it is a great achievement to farmers”, Garba noted.

He said it will improve economic savings for farmers as they will spend less money on procuring and using insecticides/pesticides which are harmful chemicals thus reducing their exposure to their hazards.

“Farmers will enjoy higher returns and premium prices from their maize products stemming from improved yields and better grain quality.

“Economic losses incurred by farmers in Nigeria from fall Armyworm to the tune of over $268 million experienced in previous years would be reversed.

“The addition of insect protection will also reduce pesticide use which will bring benefits to both the environment and human health.

“A more reliable harvest will give farmers additional confidence to invest in their farms and improve their farming practices”, Professor Rabiu added.

Hafiz Mohammed, Special Adviser to Kano State Governor on Agriculture said TELA maize would assist farmers by increasing their yield by 50 per cent.

He said the Kano State government would key into the technology with the aim of increasing maize production in the state.

“TELA maize will assist our farmers seriously, s we heard from the developers of the crop, that it will increase yield by 50 per cent. In 2019, Nigeria produced about 18 million tons of maize so, if you multiply this by 2,definitely, it will change the life of our farmers.

“Kano state government will key in to adopt this technology, that is why I am here”, Mohammed said.

Furthermore on the benefits of the maize variety, Professor Rabiu said “GM insect-pest protected maize reduces the need to application of broad-spectrum insecticides which reduces exposure of farmers to insecticides, especially for those using hand sprayers thus brings benefits to both the environment and human health.

The application of insecticides leads to poisoning resulting from exposure during preparation of the spray solution, application in the field, and waste handling.

It started on the continent in 2018 and builds on 10 years of excellent conventional breeding work on the Water Efficient Maize for Africa (WEMA) Project that was formed in 2008 in response to a growing call by African farmers, leaders, and scientists to address the devastating effects of drought.

Professor Rabiu said Nigeria joined TELA Maize Project in 2019 and trials of Drought TEGO under conventional breeding were carried out in six locations across the country with promising results.

He said across all locations, Drought TEGO out-yielded other hybrids by 70 to 80 per cent under water stress conditions.