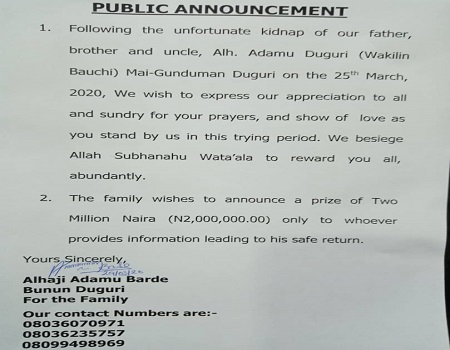 Barely a week in the hands of kidnappers of Yaya Adamu Duguri, the elder brother of Bauchi State governor, Sen Bala Mohammed Abdulkadir who is in quarantine after testing positive to COVID-19 infection, the Mohammed Abdulkadir Duguri family has made an offer of the sum of N2 million as compensation for any useful information that will lead to the safe return of their kidnapped brother.

The reward on information leading to his safe return was contained in a 3 paragraph press statement signed by one Alh Adamu Barde, Bunun Duguri copies of which were made available to newsmen in Bauchi, Sunday evening.

The statement reads, “following the unfortunate kidnap of our father, brother and uncle, Alh Adamu Duguri (Wakilin Bauchi) Mai Gundumar Duguri on Wednesday, 25th March 2020, we wish to express our appreciation to all and sundry for your show of love and prayers as you stand by us in this trying period. We besiege Allah (SWT) to reward you all abundantly”.

The release further contained that, “the family wishes to offer the sum of Two Million Naira (N 2 Million Naira) to whoever is willing to provide information leading to his safe return.”

But in a reaction to the development, a security expert who spoke to our correspondent pleading anonymity faulted the step taken by the family by announcing monetary reward stating that it will jeopardise whatever efforts security operatives are making to get him out of captivity.

All efforts to get a reaction from the State Police command proved abortive as the PPRO, DSP Kamal Datti Abubakar, did not pick up the phone neither did he reply to the SMS sent to his number.

It will be recalled that unknown gunmen kidnapped Adamu Duguri at about 7. 30pm last week Wednesday at Kobi Street in Bauchi metropolis.