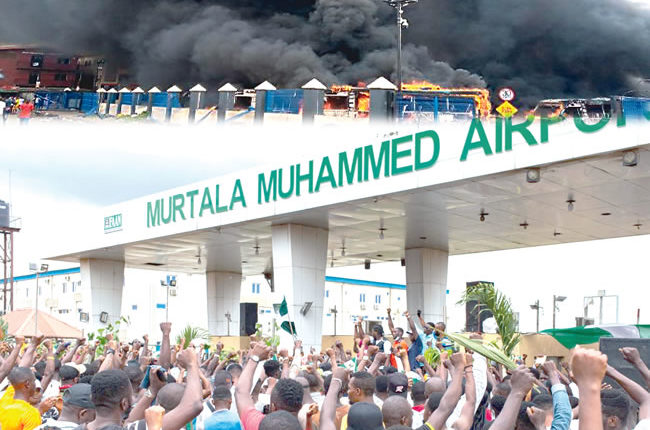 IT has emerged that the #EndSARS protest which snowballed into a major cycle of crises could have been avoided, had Nigerian authorities heeded the prediction of international researchers carried out months back.

Both the federal and state governments are still counting the enormous losses in destruction to public and private investments during the protests, which have been projected to be in trillions of naira.

In the Civil Unrest Index Projections released in the middle of July this year, Miha Hribernik and Tim Campbell, in their report commissioned by The Armed Conflict Location & Event Data Project (ACLED), identified 37 countries that will face major spikes in unrest during the second half of this year, driven by a painful post-pandemic economic recovery that will inflame existing public anger with governments.

According to the researchers, economies facing a ‘perfect storm’ of risks are mostly concentrated in Africa and Latin America, including Nigeria, DR Congo, Ethiopia, Venezuela and Peru. The also warned investors, companies and insurers in key emerging markets to also brace for an explosive end to the year.

“The highest risk countries include Nigeria, Iran, Bangladesh, Algeria and Ethiopia, which face a ‘perfect storm’ of popular anger as protests driven by the pandemic’s economic fallout inflame unrest over pre-existing grievances.

“In sub-Saharan Africa, the risk of protests is set to intensify amid economic decline, poverty, and inability to guarantee adequate food supplies. Key markets to watch include Nigeria (11th), Ethiopia (14th) and DR Congo (15th). “This volatile climate only requires a spark to set off major unrest. This has already happened in Ethiopia, where recent mass protests, triggered by the killing of prominent Oromo activist musician Hachalu Hundessa, claimed 166 lives.

“In Nigeria and DR Congo, growing food insecurity is stoking anger. Although rice production in Nigeria is increasing, it is still insufficient to feed Africa’s most populous country.

“Lagos has seen food prices increase by up to 50% in recent months and it’s a similar picture in DR Congo, where the rising cost of staples has led to unrest in Kinshasa and other cities, including the mining hub of Lubumbashi”, the researchers predicted.

To be sure, 2020 has been a particularly tough year for Nigerians where already escalating poverty and unemployment were compounded by the covid-19 pandemic. According to National Bureau of Statistics (NBS) in a report sometimes ago, “more than 37 per cent of households reported being exposed to an increase in prices of major food products, while nearly 12 per cent of exposed households report reducing food consumption in order to manage the impact of shocks”. In September, food inflation in Nigeria had risen to 16.6 per cent from 16 per cent in August.

Before the COVID-19 pandemic, Nigeria’s unemployment rate was already high at 23.1 per cent while underemployment stood at 16 per cent, according to the NBS. In May 2019, Chris Ngige, the Minister of Labour and Employment, forecast an unemployment rate of 33.5 per cent by 2020. Over 40 per cent of Nigerians employed in non-farm enterprises reported a loss of income in April-May 2020.

In addition to that, a fall in remittances is likely to affect household consumption given half of Nigerians live in remittance-receiving households. The World Bank, which anticipates Nigeria heading into its worst recession in 40 years as it projects the economy to shrink between 3.2per cent and 7.4 per cent this year, said COVID-19 shock alone is projected to push about 5 million more Nigerians into poverty in 2020.

Prior to the pandemic, the number of poor Nigerians was expected to increase by about two million largely due to population growth. But that number will likely increase by seven million – with a poverty rate projected to rise from 40.1 per cent in 2019 to 42.5 per cent in 2020, according to the global bank’s report.

In its latest poverty report, NBS said 40 per cent of citizens live in poverty, highlighting the low levels of wealth in a country that has Africa’s biggest economy. The agency noted that 40 per cent of people in the continent’s most populous country representing 82.9 million people lived below its poverty line of 137,430 naira ($381.75) a year.