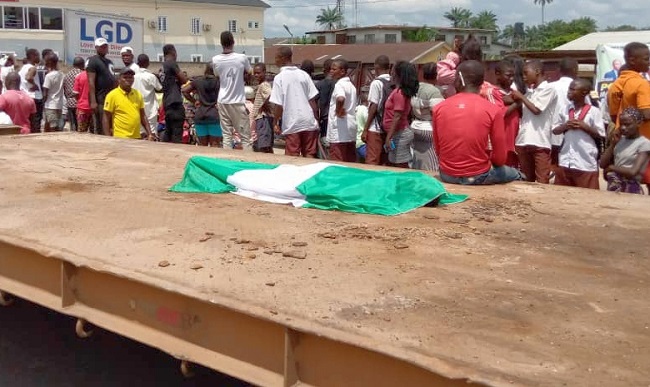 A 13-year-old boy died on Monday after falling off a moving truck during the #EndSARS protest in Sapele, Delta State.

He was said to have joined hundreds of other protesters who stormed the streets of Sapele to air out their grievances.

The young boy reportedly jumped on the back of the moving truck that was headed out of the ancient town, fell off and died of injuries sustained.

“He jumped on a moving truck that was heading outside town and the next thing was that he fell from the back of the moving truck and before we could rush him to the clinic, he died,” a witness narrated.

The corpse of the teenager was thereafter wrapped in the Nigeria green-white-green flag and put on the back of the open truck for display at the Amukpe area of Sapele.

The tragedy caused a massive traffic gridlock to and from Benin and Warri.

Tribune Online reported that hundreds of #EndSARS protesters since Sunday stormed the Sapele end of the Warri – Benin Highway, causing gridlock for travellers using that route.

In continuation of the protest, the protesters on Monday vowed not to back down as a group of them marched through the town singing solidarity songs.

Besides the assurances of the disbandment of SARS they requested from the Federal Government, the youths also demanded the quick fixing of the deplorable and nightmarish Benin/Sapele highway of the road.

In Warri, #ENDSARS protesters who held a candle night on Sunday in honour of slain victims of SARS resumed at the Effurun roundabout on Monday morning to clean up.

Another group of protesters headed to Warri – Sapele road in tricycles chanting: “Buhari Must Go,” and armed with banners expressing their grievances.

She didn’t give details of the deceased but urged #EndSARS protesters to carry out their activities within the confines of the law of the land.