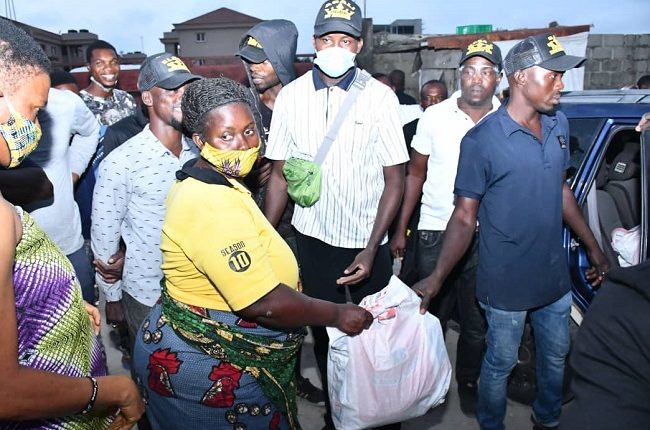 The Oniru of Iru Kingdom, Oba AbdulWasiu ‘Gbolahan Lawal, has commenced distribution of food items to the residents of the kingdom in a bid to cushion the effect of the pandemic on the residents of Iru land to celebrate Eid-el-Kabir.

The food distribution initiative tagged: “Ileya Food Drive,” which commenced on Wednesday, July 29, 2020, was meant to assist the less privileged in the kingdom, particularly those of Oniru Resettlement, Igbosere community, itirin community, Inupa community, Apapa Eleko, Onijegi and the low-income communities along the Water Corporation Drive axis of the Kingdom.

Over 5,000 food packs consisting 10kg of rice and other dry foods, groundnut oil and food seasonings were distributed to some households across Iru Kingdom.

Speaking on the gesture, Oba Lawal said that the distribution of the food packs to the residents was in line with the teachings of Eid-el-Kabir which enjoins everyone to remember and empower the less privileged.

The monarch, who spoke through his private secretary, Hakeem Akintoye, said that over 5,000 food packs consisting 10kg of rice and other dry foods, groundnut oil and food seasonings were distributed households across the kingdom.

According to the oba, the empowerment is part of the lessons of the festive season, adding that the gains of assisting the less privileged as preached by Islam is not only for the purpose of spiritual fulfilment but also for the progress of mankind and development of the society.

“To help cushion the effects of the pandemic on Iru Land, the Oniru, His Royal Majesty, Oba Abdulwasiu Omogbolahan Lawal, (Abisogun II) has sponsored the distribution of food packs in a seemingly new initiative tagged, ‘Ileya Food Drive’ to celebrate the Eid-El Kabir Festival.

“Over 5,000 food packs consisting 10kg of Rice and other dry foods, groundnut oil and food seasoning were distributed to some households across Iru Kingdom especially Oniru Resettlement   Igbosere community, itirin community, Inupa community, Apapa Eleko , Onijegi and the low-income communities along the Water Corporation Drive axis of the Kingdom. From Wednesday, July 29 to Friday, July 31, 2020,” the statement said.

The food items were distributed to the beneficiaries by the staff of the palace, who ensured that the targeted communities and households got the branded packs.

The visibly elated recipients expressed gratitude to the Oba Lawal for the gesture of love and empathy despite the tough economic circumstances currently experienced across the state and country at large.