Entertainment
By Temidire Bada On May 3, 2021 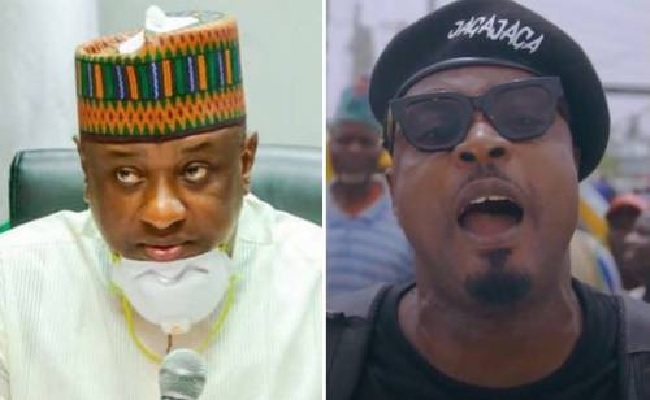 Nigerian Rapper and Singer, Eedris Abdulkareem, has again fired back at the Minister of State for Labour and Employment, Festus Keyamo, in his new song, released on Friday 30th April titled ‘Jaga jaga oti get e’ referring to the minister as Senior Advocate of nonsense.

Edris who targeted Keyamo’s insincerity to him said: “In 2018 when you got your appointment, I thought you were still a comrade, thought you could affect change in your government” and adds “your government is not working.”

The jaga jaga crooner similarly highlighted issues in the country and alleged that “Nigeria is no longer safe. Extremism na the hallmark of our government” while he succinctly asked “is your government, not a cabal wey dey tamper plenty terrorists.”

In the second verse of the song, Eedris critically acclaimed that “Keyamo you don join the cabal, wey dey deceive the people of Delta State” before capping him “SAN of rubbish, Senior Advocate of Nonsense.”

Earlier, Eedris Abdulkareem released a song he titled “Jaga Jaga Reloaded” where he questioned the ministers’ sincerity. The diss in what Festus Keyamo regarded as Blackmail led to the minister’s clap back at Eedris in a series of tweet on April 24, whilst supporting his claim with screenshots of text messages between them; an action which led to Twitter taking down the post in line with its user privacy policies.

Festus Keyamo had stated that Eedris wanted an unmerited political favour which he denied. A claim, Eedris now replied, “I thought he is a brother.”

FULL TEXT: A viral post on WhatsApp is asking N-Power candidates to verify the status of their application and see if they have been shortlisted for the batch C cash grant…Eedris Abdulkareem disses Festus Keyamo in new track

NDLEA raids eateries in Plateau, Enugu, recovers cakes made with Indian hemp, others

13-year-old girl missing after disagreement with mother in Delta