I am a bonafide APC member, says Ize-Iyamu 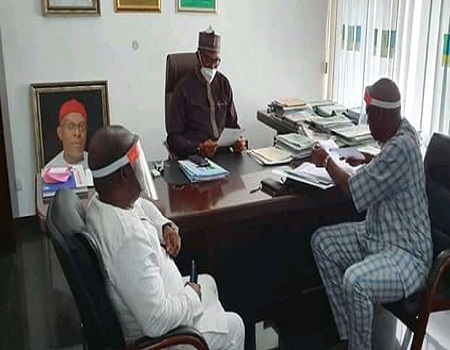 Ahead of the primary election scheduled for June 22, Ize-Iyamu was accompanied by the factional see of Edo State Chapter of the party, Mr Lawrence Okah.

A statement signed by Mr John Mayaki, the Director of Communication and Media to Mr Osagie Ize-Iyamu Campaign Organisation confirmed the development disclosed that Ize-Iyamu has submitted his form at the party headquarter in Abuja.

Mayaki said: “It is another attestation to the fact that Pastor Osagie Ize-Iyamu is ready for the party primary where members of the APC in Edo state will get to decide who will fly the party’s flag in the governorship election.”

Recall that Mr Osagie Ize-Iyamu was jointly endorsed by seven other aspirants of the APC in a consensus agreement on Tuesday.

While addressing his position in the party, Ize-Iyamu dismissed a statement credited to some persons “who claimed to be chairmen of the 18 local government areas of Edo State purportedly challenging his membership of the party” on the grounds that it fell short of the party’s constitutional requirements.

He said: “Pastor Osagie Ize-Iyamu was one of those who not only formed the APC but drafted the constitution of the APC. It is quite unfortunate that many of these people don’t read; they have not sat down to even read the APC constitution.”

The spokesman added that apart from being a progressive party, the APC was deliberately formed to be a mass organisation and one of the things those who drafted the APC constitution (including Ize-Iyamu) did was to make it easy for Nigerians, irrespective of who they are, to be able to join the party without putting hurdles in their way as politics is a game of number.

Mayaki pointed out that article 9 of the party clearly states a potential buyer member can either go to his ward and register or through online registration, the essence of which is is to ensure that nobody is deprived of membership.

Malami Explains Why Buhari Signs Executive Orders
The Attorney-General of the Federation and Minister of Justice, Abubakar Malami (SAN), on Thursday, said the Presidential Executive Orders are aimed at complementing existing legislation and ensure inter-agency coordination in the process of implementation… Ize-Iyamu Ize-Iyamu Read full story