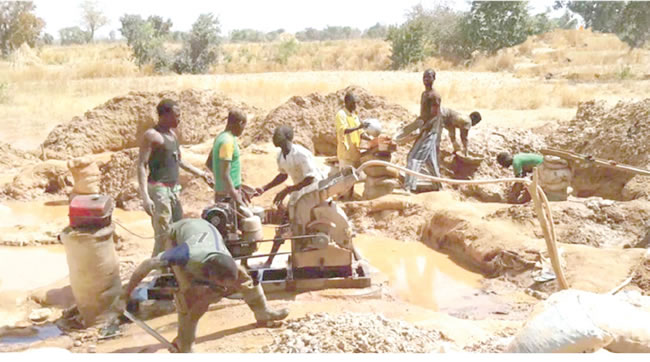 In this piece, MUHAMMAD SABIU reports the terrifying trend of illegal mining in Zamfara State despite government ban, and the foreign collaboration in this ruinous ring of illegality.

Ten years ago, precisely in 2010, the outbreak of lead poisoning in Zamfara State led to the death of over 500 children. The Federal Government earlier banned mining in the state, as police consider illegal mining to be behind an ongoing spree of violence and kidnapping in the region.

The northwestern state has experienced periods of significant violence in recent years, with gang rivalry and cattle theft among the reasons for the conflicts, which were estimated to have claimed over 3,000 lives.

Conflict over resources significantly extended into the state’s mining sector, with the region suffering from illegal mining operations eager to exploit what the Human Rights Watch calls “significant deposits of gold” in the state. Nigeria also has considerable reserves of tin and zinc, although many of these deposits are undeveloped, and it is estimated that up to 80% of mining operations in the state are illegal or small-scale projects.

Africa’s artesanal and small-scale gold mining sector has development potential. At their peak in 2017 these mines in Niger, Zamfara employed as many as 600,000 people and created opportunities for local infrastructural development. But these prospects are undermined by criminals who profiteer from the sector at the expense of vulnerable populations.

Collaboration between politically connected Nigerians and Chinese corporations in illegal gold mining drives rural banditry and violent local conflicts in some parts of Nigeria. This includes the North West, North Central and to some extent South West regions.

An estimated 80% of mining in the North West region is carried out illegally and on an artisanal basis by local populations. The mining of large untapped mineral deposits in the area, especially gold which has strategic importance and economic value, is at the root of community violence.

The government’s ban of artisanal gold mining in Zamfara State and across the region, and the deployment of soldiers to enforce the ban since April 2019, have yielded few results. Illegal mining and its associated conflicts continue regardless. The conflict has been on the increase since 2014, spreading across Kaduna, Katsina, Kebbi, Plateau and Zamfara states. Over 5 000 people have been killed in Zamfara State in the past five years. In February 2020, soldiers killed 13 bandits during clashes in Zamfara and Kebbi states.

The outbreak of lead poisoning in 2010 took place in two local government areas of Zamfara, namely Anka and Bukkuyum and affected many villages like Yalgama, Abare, Bagega, Tungar,  among others. Nigerian Tribune gathered that the large deposits of gold in those communities fuelled the activities of illegal mining. A resident of Anka town, Usman Anka recalled how residents of these areas were engaged in illegal gold mining without following safety rules. He noted that married women, adults and teenagers were all involved because of the fortune and money involved, not minding the health hazards.

‘We suffer from heart-related diseases’

“At the end of the day, children suffer from heart failure and brain disease. While women become barren, men suffer from erection dysfunctional,” he disclosed.

Also a licensed miner, who gave his name as Mohammed Maru remarked that ten years after the sad experience, the activities of these artisanal miners in those communities and beyond have not changed but instead doubled in large scale because of the involvement of foreign nationals. He added that top politicians, foremost businessmen and the elite, among others, are all involved in illegal mining in the state. Thus, he said it is difficult to differentiate between the licensed miners and those illegal miners because of the booming business.

Sadly also, the state is further crippled by the activities of bandits and cattle rustlers. In a recent statistics released, the state government noted that over 5,000 people were killed as a result of the insecurity bedeviling the state.

Speaking on the ruinous ring of illegal mining in the state, a former Commissioner for Environment, Dr Nura Muhammad Gusau in a recent interview with journalists disclosed that gold mining in the state dates back to 1903. He said at that time gold mines were established. According to him, based on a comprehensive survey conducted 20 years ago, the state is blessed with mineral resources, saying the mineral deposits in the state are some of the richest in the country.

“We have widespread mineral distribution in Anka, Maru, Talata Mafara and some parts of Dansadau. Out of 36 mineral deposits that have been discovered in commercial quantities in Nigeria, we have almost 32 in Zamfara State,” he said.

Findings by the Nigerian Tribune reveal that the boost in illegal mining became disturbing with the influx of foreign nationals from Russia and China to the state. Investigation carried out by the Nigerian Tribune indicated that many locals are employed by these foreign nationals with mini-residents been built in the forests where they supervise these illegalities. Speaking on this, a top government official who pleaded for anonymity remarked that a comprehensive survey of the minerals in the state shows that these illegal foreign miners have always been attracted to the large deposits and the biggest reserve of minerals in the country, adding that bypassing government regulations usually provided the opportunity of getting cheap labour from the locals.

A resident, Musa Bagega, told Nigerian Tribune that “strangers have invaded our villages; they are all into mining. They are in our villages and the surrounding neighbourhood. Some have even bought houses for their workers; we feel unsafe with their daily influx.” 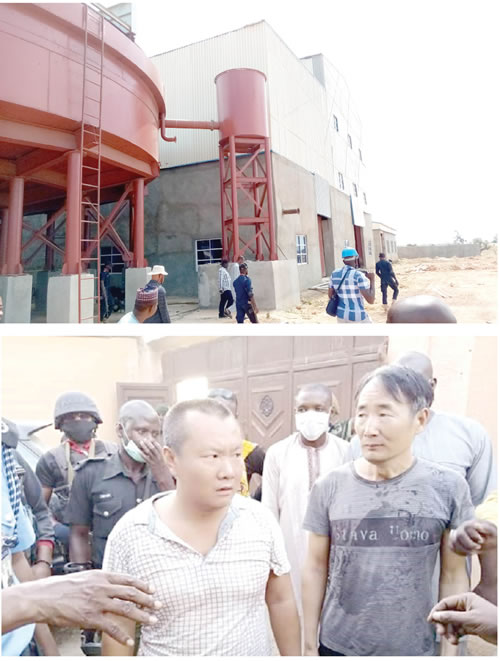 Indeed, the only time the locals were happy in the state was the arrest and subsequent prosecution of 18 Chinese illegal miners. According to reports, they were arrested in their hideouts by the Anti-mining Presidential Committee. They were later arraigned before a competent court of jurisdiction and eventually sent to prison. Many residents reportedly said the spate of insecurity abated for a while after the arrest and prosecution took place. However, the peace and tranquility enjoyed was short-lived. A source who pleaded for anonymity remarked that “is it a coincidence that in Anka, Bukkuyum, Talatan Mafara, Maru are flashpoints for banditry and illegal mining?”

Advancing reasons behind the ban, the National Security Adviser, General Babagana Monguno, stated that activities of illegal mining and the attendant insecurity and health hazards were alarming. According to him, reports have indicated that the involvement of both foreigners and the locals has continued to be a major threat to the lives of the ordinary citizens of the state.

In the case of the flight ban, he said that intelligence reports have shown that small aircraft were being used by some of these miners in Zamfara forests. Thus, he was of the view that the use of aircraft showed a major source of worry and the urgent need to stifle the activities of those involved.

Matawalle argued further that the mining sector is very significant to the economy of the state. To underscore that importance, he noted that before the suspension of mining activities in the state by the Federal Government, a survey had shown that over 100,000 artisanal miners were operating in the state.

“These artisanal miners produce roughly 10 tonnes of gold per year; they sell at a local value of 70-80% of the international price. Of significant importance however, is the loss the federal and state governments incur due to non-registration and abuse of procedure,” he reiterated. It was also gathered that majority of the miners working in the various mining fields in the state do so without any type of license; these include reconnaissance, exploration, or mining leases license. This according to the governor deprives the federal and state governments of royalties from access fees, ground rents, and other levies that the state may deem appropriate in order to facilitate the safety, security and wellbeing of the miners and the mining communities, while remaining within the legal parameters recommended by the nation.