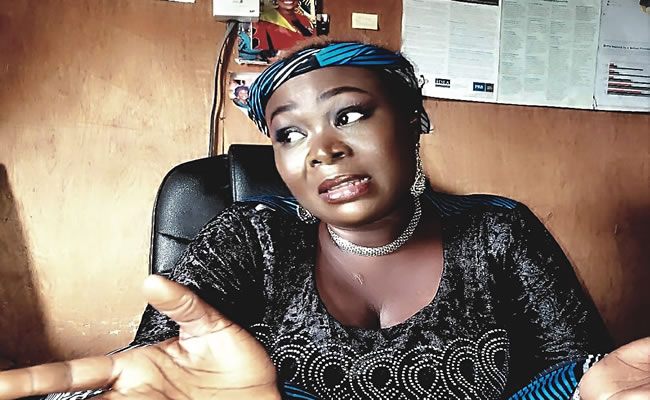 Dr Wulemat Adeyinka Bello-Olarinmoye is a senior lecturer at the Lagos State University (LASU), Ojo. She dropped her Muslim name as a protest against the recent gruesome murder of Deborah Samuel, a student of Shehu Sagari College of Education, Sokoto, after she was accused of blasphemy by her schoolmates. The don, who had her first two doctoral degrees in Anthropology from the University of Ibadan, in this interview by TUNBOSUN OGUNDARE, explains her action and shares her view about the Nigerian state.

You dropped your Muslim name because a lady, Deborah Samuel, was killed. Don’t you think that was rather too much?

Not at all. I had wanted to drop the name, Deborah’s killing only hastened the action.

Long before now, I had been wondering why I had to bear a foreign name before I could serve God. I cannot link the two together either as a Muslim or a Christian. I think a name given generally is a cultural expression and for the purpose of identification. But then, I dropped the name now as my immediate reaction to Deborah’s killing. I felt there was no need to continue to answer the name.

You said you had long been thinking of dropping the name. What informed that thought?

It is part of the decolonisation process for me. It is time to write a new narrative about Africa and its people. After centuries of colonisation and recolonisation, we ought to let go of things that attach us to colonisation. I started having the feeling that for us to have any meaningful headway as a country, we need to redefine our values in education, science, technology, commerce and every other part of life, including religion. We need to look inwards for our development by using our indigenous knowledge. I have been thinking about this for a long time and sincerely, if asked of the real meaning of my Muslim name, Wulemat, I may not be able to give the correct explanation except that I know that it is from Arabic origin. And the truth is that since I was a little girl, I had wanted to know the meaning of the name but nobody, including my parents, could tell me. As I continued to search for answer, I came to the nearest meaning in Arabic, which is ‘Wolimat’. And ‘Wolimat’ is Yorubalised to sound as ‘Wulemat’. Most Yoruba Muslim names are  actually Yorubalised. They are Arabic words. That is why many younger ones nowadays are coining their names to sound like Arabic names. For example, name like ‘Adijatu’ has been changed to ‘Khadijat’ and so on. I think with this, we are getting too deep into other people’s culture.

Now, the nearest meaning to ‘Wulemat’ is ‘celebration’ in English language and that means my name in Yoruba language is ‘ariya’. So, if I chose to be called ‘Ariya’, I would still be serving Almighty Allah and follow His principles. I don’t think names have any import regarding your relationship with God, particularly when it is not in His instruction. I think, essentially, we should move away from outward declaration of love for God. Loving God is a thing of the heart. We should understand that no culture is superior or inferior to another. God is universal. So, as a Muslim, I think I can relate with God without bearing an Arabic name.

Now, are you considering legalising ‘Ariya’ as your new name?

Well, making it legal may not be necessary. Names are symbolic. It is just for the purpose of identification. So, I am not thinking of legalising the new name. I have already made a statement; I have put it on record that I don’t like that Deborah was killed under the pretext of religion. I believe the statement has also got some people better informed that no human life should be taken anyhow.  Human lives are sacred and cannot be taken just anyhow, not under the circumstances Deborah’s life was taken. It was barbaric. Even Islam admonishes that if you want to kill an animal for food, you have to do so with sobriety and mercy. I have studied the Qur’an and Hadith and I have never seen any portion where blasphemy allegation attracts lynching. The killing of Deborah really portrays Islam and Muslims in a very bad light and I will never be part of that. So, the statement I made, I believe, is a pointer that not all Muslims support killing. We must be civil in our actions and love others as God loves us all. If you cannot love somebody you see, it becomes a pretence to say you love God and fight for Him or His Prophet you can not see. Even at that, Prophet Muhammad (S.A W.) was not  a tribal person. He was not a Nigerian. He was neither Yoruba nor Hausa nor Fulani. He was an Arabian, just like Jesus Christ was a Jew and so, killing people on the basis of religion is  totally uncalled-for.

But reactions to Deborah’s killing have differed between people in far North and those in the South. Whhat do you make of that?

It is a serious issue. Although I had restrained myself from saying this, I say that Nigeria is a wrong contraption. Nigeria shouldn’t have been. We are different peoples. I used to think that our issue was about class; that we were one Nigeria; that it was the elite, the political class, that was dividing us for their selfish gains. I used to think that they were using religion and ethnicity to divide us. But with the unfolding occurrences in the last two to three decades in the country, I have begun to feel that it would be a very good thing if each region could go its separate way. We can still relate but not the way the country is structured today. We don’t have the same orientation. We don’t have the same values, particularly when it comes to the sanctity of life. Here in the South, especially South-West, where I am from and very familiar with, we like enjoyment. We embrace all manner of ideologies. We love and embrace people, irrespective of where they come from and the religion they practise. We relate harmoniously with others. So, if other tribes are like us, the case of Deborah wouldn’t have happened at all. To take a human life just like that? No, it wouldn’t have happened.

Even if we can’t go our separate ways, as I said earlier, we should have a leader or leaders that will love all Nigerians equally and not people from a particular tribe lording it over the others as we have currently.

If there is no fairness in our polity and we are constitutionally bound together, there will be problems all the time. We must have one law applicable to all, irrespective of tribe or religion. But this is not so in Nigeria.

How did you receive news that the people arrested so far in connection with Deborah’s killing were charged with preach of public peace and not murder?

It was shocking. There is evidence here and there. Tere is the viral video showing the people who took law into their own hands; who beat and stoned Deborah to death and burnt her corpse. The act is unthinkable in a sane society. To now see some people again taking to the streets to protest the arrest of suspects is something I could never have imagined. This totally pissed me off. What kind of country are we in? Even we have not heard any concrete statement from the president on the matter. I thought the president was for all Nigerians. It is not about mere condemning the action, even if Mr President has done so, it is about ensuring that everyone who participated in the killing faces the wrath of the law. The evidence is conspicuous in the viral video except we are now saying that Nigeria has no law against jungle justice. That is the only way to prevent others with similar intent in the future. This kind of thing is not new but the leaders must be able to stand up against it.

It is high time we began to respect our laws. I have been unable to get answer as to what exactly Deborah’s killers stand to gain by their action. Truth be told, something is really wrong with us as a country. Now, I am not bold enough to allow any of my children to school or do the one-year mandatory national service in the North. The one that was posted to Maiduguri for service, I couldn’t sleep for the five weeks he spent there before we secured his redeployment to the South-West. Is that the way Nigeria should be? Certainly not.  Even I cannot dare to travel to any part of the North, no matter the need. To even leave Lagos and travel to my home state, Ondo, I have to embark on marathon fasting and prayer. That is how bad our situation is as a country. How can I be a proud Nigeria if I am not free to move from one part of the country to another? You will be afraid of possible attacks by bandits, kidnappers and all manner of criminal elements on the highways and all over the place. That is not not the kind of country we desire.

How do you think such a case as Deborah’s can be stopped in Nigeria?

This may not be possible except we restructure the country whereby the geopolitical zones or regions are more empowered than the centre. Anything outside that will not bring a permanent solution. Let people have their regions and develop them. That can bring solutions to many of the problems facing Nigeria.

Are into partisan politics?

I won’t say yes to that question because as a lecturer, I am a public servant. But then, some people see me as a good material for political office and are encouraging me to go to the National Assembly. But a circular from the Lagos State government states that any its employees who is interested in political office and wants to test his or her popularity at party primaries should resign first and I am not ready for that. I cannot afford it. If I resign and am unable to secure party ticket, let alone contest actual election, what becomes of me? That is a huge risk I can’t afford to take.

Why were you skeptical about you winning the party ticket?

You and I know that we play money politics in Nigeria. Where will a poor lecturer get a huge amount of money from?  Local government councillors have more money than the highest paid professors in Nigeria. Partisan politics is about money. Maybe when we begin to have godmothers, just like there are godfathers in the potitical circle, who can bankroll women with political ambition, women will have no difficulty defeating the men.

No place for IPOB/ESN hoodlums in Delta —CP Mohammed Ali

My agenda for Osun —Adeleke