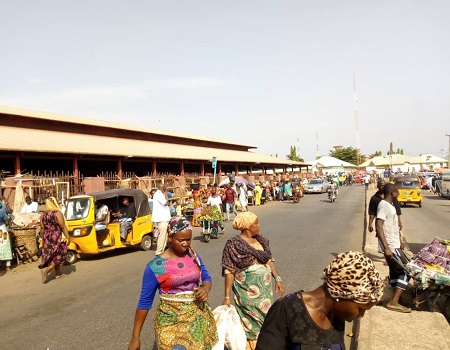 The residents and traders in Kogi on Saturday defied government’s lockdown order directing residents to stay at home and the closure of markets in the state.

The Kogi Government had on Friday announced that it would shut down the state as from Saturday, March 28, as a measure to contain the spread of the dreaded coronavirus in the state.

The chairman of the Squadron Committee set up by the governor to enforce compliance, Mr Edward Onoja, who doubles as Kogi Deputy Governor, declared this in a press conference on Friday in Lokoja.

Kogi State government through the Ministry of Environment on Saturday also held a low key monthly sanitation exercise across the state.

Our correspondent who monitored the shutdown order reports that activities in the state remained as usual as shops were opened and traders selling their goods and products in all the markets visited.

At Kpata market and Lokoja international market, even though all the entrance gates were under lock and key, the road to the market was flooded with traders in their great numbers carrying out their usual transactions.

ALSO READ: Kogi has no record of coronavirus ― Sen Adeyemi

However, there was some level of compliance at the Old market during the period of the monthly sanitation exercise within the hour of 7 am to 10 am, but traders later opened their various shops immediately after the exercise.

Many shop owners in Lokoja metropolis opened for business.

Some of the traders who spoke said that they were not aware of the shutdown directive by the state government, saying they needed to earn their daily living.

A trader, Mrs Hassanat Mohammed, a yam powder seller, told newsmen that she was not aware of the shutdown directive, saying, ”I have to sell to feed my children”.

Speaking to journalists shortly after the sanitation exercise, the State Commissioner for Environment, Mr Victor Omofaiye, stressed the need to brace up on the issue of enforcement, saying, ”what has played out today shows that we are yet to get it right”.

According to him, in as much as we have shut down the markets and traders have decided to use roads as a market place; as government, we will be focusing on the area of full enforcement.

”We will also improve on public sensitisation for people to strictly adhere to the government directive on the shutdown order.

”We thank God that today’s monthly sanitation exercise was a success and we hope that the subsequent ones will be better because we will be building on what we have started.

”By and large, we decided to do it in a low key because we are trying to avoid large gathering of people in order to maintain social distancing due to the current outbreak of COVID-19 in the nation,” he said.

Earlier at the market, the commissioner ordered the immediate evacuation of all goods and products displayed by the roadsides in front of the market, warning that anyone that flaunted the government directive would face sanctions.