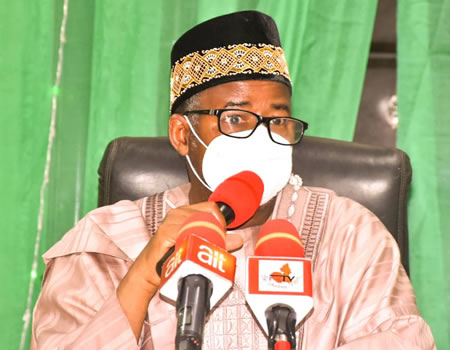 Bauchi State Government has declared a total lockdown of three LGAs of Giade, Katagum and Zaki as a measure to curtail community transmission of COVID-19 pandemic in the state.

The total lockdown which takes effect from Tuesday, May 12, 2020 is for an initial 10 days to monitor how the situation will be controlled which will determine the next line of action to be taken.

While declaring the total lockdown on Sunday, a visibly disturbed Bauchi State Governor, Senator Bala Mohammed, decried the attitude of the people of the Northern zone of the state, particularly the three LGAs from which a total of 44 positive new cases were returned in one day.

He added that in spite of the series of calls, the people still travelled to Kano on a daily basis from where they were importing the infection, thereby making it a community transmission problem which he said is not acceptable by the government.

Bala Mohammed therefore gave the deputy governor, Senator Baba Tela, a marching order to immediately proceed to Azare in order to ensure that the total lockdown order was fully implemented no matter who is involved.

He said that, “We share borders with Kano and Jigawa, so our people from the Northern zone find it very easy to go to Hadejia and other towns for businesses from where they get infected and bring it to transmit among the people innocently. We must put a stop to the trend.”

He added that, “The situation is very alarming. Just as I was talking to you, another information came in that additional 27 positive cases from the area arrived, you can imagine what we are saying.”

The governor then appealed to the people of Bauchi State to continue to adhere strictly to all the prescribed public health protocols put in place by government to curtail community transmission of the infection.

He also appealed to the testing centre in Jos to release results of samples sent for testing from the state assuring that his government is working round the clock to have a COVID-19 test laboratory to ease the problem of testing.

On the deaths in Azare, the governor disclosed that available records have it that in the last 30 days the total number of death is about 120 majorly from old age, childbirth and other terminal illnesses. We only have one COVID-19 related death in the entire state.”

In his remarks, the Deputy Governor, Senator Baba Tela assured the governor that his committee was equal to the task and will do everything possible to enforce the total lockdown in the three LGAs.