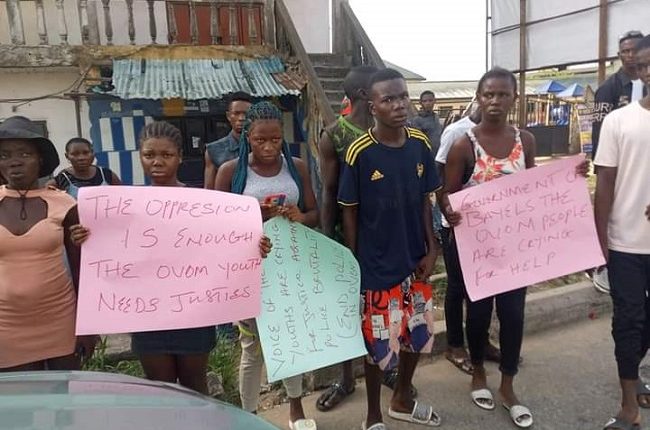 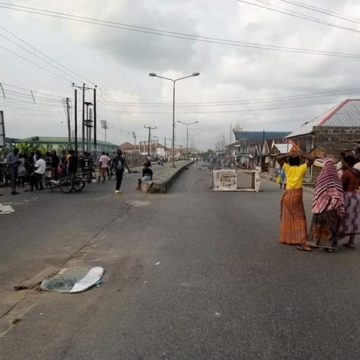 Angry and uncoordinated youths of Ovom Community in Yenagoa Local Government Local Area of Bayelsa State blocked the popular Melford Okilo Road in protest against the Nigerian Police Force, Bayelsa State Command for the alleged extra-judicial killing of a 17 years-old-boy, an orphan identified as Samuel Jamaica.

According to sources in Ovom, the police visited the suburban neighbourhood in unmarked vehicles to search the apartment of three suspects arrested for selling stolen mobile phones when they shot the orphan who was taking cover to avoid being arrested.

According to the source who did not wish to be mentioned said “we were sitting out in our neighbourhood when two unmarked cars drove in, but before we could sense it, armed policemen came out with three guys in handcuffs, so we all ran.

“We all ran for fear of being arrested because it is well known that whenever they arrest anybody from our neighbourhood, they demand fees as high as N200,000 for bail. I was hiding inside an uncompleted building close to where Samuel was hiding when I heard one of the policemen telling somebody I suspect is his team leader that there is somebody hiding in a ceiling.

“And the other person said ‘i have given you the last order to shoot them at sight’. The next thing, it was a gunshot and the scream of Samuel I heard. I was lucky they didn’t discover where I was hiding. I remained there until I was sure they had left before I came out of hiding. When I came out, I learnt that the police had taken his corpse away, so out of anger youths came out and blocked the road in protest.

“I can swear with my life that Samuel is not a cultist or a thief. He is an orphan whose father and mother died many years ago. He is one innocent young boy living with his elder brother in the community and managing the little they have to fend for themselves. It is painful that policemen would just drive to your Community and kill somebody unchallenged. We won’t let that happen.”

But the Police Public Relations Officer, SP Asinim Butswat, in a statement explaining what transpired said “on 18 March 2021 at about 1100hours, the following suspects; ThankGod Edwin, Emomotimi Ebiye and James Ebala were apprehended at Yenezue-gene, Yenagoa, by the Hausa community were the suspects came to dispose of three android phones robbed on gunpoint. They were subsequently handed over to Police for investigation.

“Upon interrogation, the suspects confessed to have robbed the phones from the owners at gunpoint. They led police operatives to their hideout at Ovom, Yenagoa, to recover the gun used in the operation. On sighting the Policemen, one of the suspects climbed the ceiling and jumped out in a bid to escape, he subsequently got injured on the neck. He was taken to Federal Medical Centre, where a Doctor certified him dead.

“A locally made pistol was recovered in the ceiling of the building. The corpse has been deposited at the mortuary for autopsy. The Commissioner of Police Bayelsa State Command, CP Mike Okoli, appeals for calm and has ordered for full-scale Investigation to unravel the circumstances surrounding the death of the suspect.”

In reaction to the protest by the Community, the Bayelsa State Governor, Senator Douye Diri, has ordered an investigation into the circumstances that led to the death of Samuel, while directing that an autopsy be carried out to determine the cause of death.

The governor gave the directive, on Thursday, night through a statement by his Chief Press Secretary, Mr Daniel Alabrah, after being briefed in Uyo where he is attending a state cabinet retreat.

He said the government would ensure perpetrators of the dastardly act are uncovered and brought to book.

“Human life is sacred. As a responsible government, we would not shy away from our responsibility of protecting it. Anyone who takes another person’s life would be held accountable through the laws of the land,” he said.

Governor Diri sympathised with the family of the deceased as well as the community, urging them to be calm and maintain peace while a thorough investigation is being carried out.

In spite of the huge investment in the water sector by the government and international organisations, water scarcity has grown to become a perennial nightmare for residents of Abeokuta, the Ogun State capital. This report x-rays the lives and experiences of residents in getting clean, potable and affordable water amidst the surge of COVID-19 cases in the state.Community youths protest+