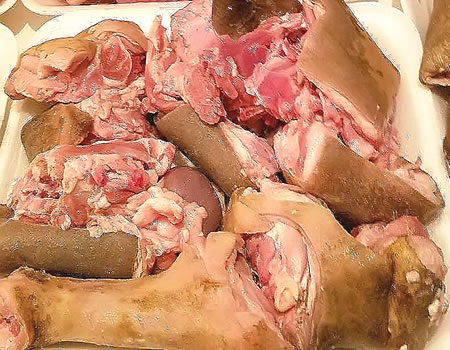 The eastern Chinese city of Jinan said it has found the new coronavirus on beef and tripe, and on packaging for these products, from Brazil, New Zealand and Bolivia as China ramps up testing on frozen foods.

According to Reuters, the importers were a unit of Guotai International Group 002091.SZ and Shanghai Zhongli Development Trade, the Jinan Municipal Health Commission said in a statement on its website late on Saturday.

The entry ports were Shanghai’s Yangshan port customs and outer port customs, it said. The statement from the city in Shandong province did not name the companies that shipped the products.

More than 7,500 people who may have had contact with the contaminated products and other related personnel have tested negative for the virus that causes COVID-19, it said.

Chinese authorities last week found the coronavirus on the packaging of Saudi shrimp in Lanzhou city, Brazilian beef in Wuhan city and Argentinian beef in Shandong and Jiangsu provinces.

China is the world’s top beef buyer and Brazil and Argentina its largest suppliers.

Zhengzhou, the capital of Henan province in central China, detected coronavirus on the outer packaging of frozen pork from Argentina on Friday, local authorities said in a statement late on Saturday on the social media platform WeChat.

The samples that tested positive came from a 24-tonne batch of frozen pork that was sent from a cold storage facility in Qingdao port to a warehouse for a market in Zhengzhou city.

The batch was found to be contaminated during a screening before the goods could enter the warehouse, the government said.

The World Health Organization says the risk of catching COVID-19 from frozen food is low, but China has repeatedly sounded alarms after detecting the virus on imported food products, triggering disruptive import bans.