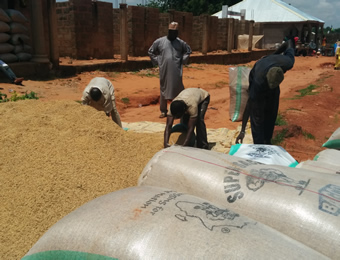 The Central Bank of Nigeria (CBN), through its Anchor Borrowers Programme (ABP), has collaborated with Prime Global Synergy to empower over 2,000 rice farmers in Nasarawa state with farm equipment.

The farmers, numbering 2,074, were given knapsack sprayers and water pump machines for rice irrigation farming.

General Manager, Prime Global Synergy, Dozie Chuwuji, while presenting the equipment in the Obi Local Government Area of the state, noted that the empowerment was on the back of the ABP’s initiative to empower peasant rice farmers across the country.

According to him, his company’s partnership with the CBN was to empower the farmers in the state, with better irrigation systems.

He noted that it was part of the ABP’s plans to improve rice production across the country, particularly through the empowerment of small-scale rice farmers.

He said; “We want them to farm all season. We are giving them water pumps so that when the rain stops they can use the water pumps to water their crops.

“We want to teach them how to grow on good agricultural practice so that they can feel the benefit of what they are doing.”