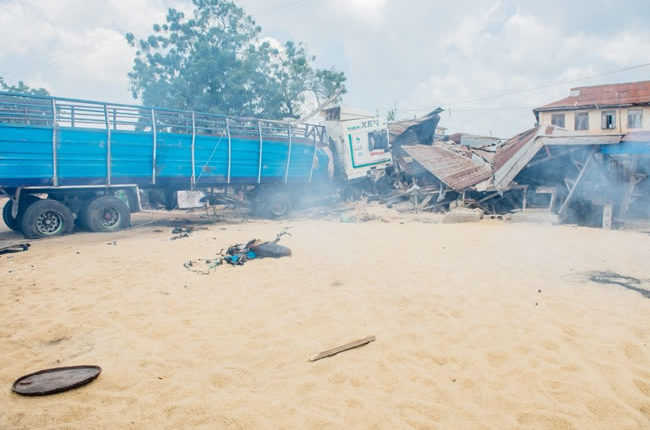 The Akungba Akoko community in Akoko South West Local Government Area of Ondo State is grieving following the death of 16 residents who were crushed by an articulated vehicle which lost control and ran into the Ibaka market, recently.

Apart from those who lost their lives instantly, no fewer than seven people were seriously injured when the vehicle loaded with bags of rice rammed into the market.

Most of the victims, including a hairdresser, Faith Remi Olotu and her two year old twins who died in the accident were preparing to close for the week when the unfortunate incident happened.

An eyewitness, explained that the truck was coming from Ikare axis of the town and heading towards Akure when the driver lost control and rammed into the popular Ibaka market

According to him, “The accident occurred at about 7pm, when the trailer loaded with bags of rice rammed into the stalls in the market.”

According to a statement signed by the Corps Public Education Officer, Bisi Kazeem, the crash occurred at about 6.30 pm when a DAF Truck rammed into the stalls in the market.

He called on administrators of local governments in the country not to locate markets along highways to prevent frequent accidents and death in the market.

He said this became necessary to reduce fatalities of road accidents on highways noting that this would help the existing operational efforts of the FRSC towards enhancing the safety of the entire motoring population.

“The corps is concerned with the rising statistics of innocent citizens who have lost their lives as a result of building markets close to the highways and has since initiated impact oriented operational strategies to curb the menace,” he said.

Following the death toll, the state governor, Rotimi Akeredolu, visited the scene of the accident to condole with the people of the community. He expressed displeasure over incessant accidents at the spot, attributing this to recklessness on the part of drivers and faulty vehicles.

“Many accidents are caused by reckless driving and unfit vehicles plying the roads. I want to appeal to our people to calm down despite the huge losses. Insurance shall cover many of the expenses. We must get the owner of the trailer and get their insurance company to pay,” he said.

The governor also promised to invite experts to review the causes of incessant accidents in the area, and proffer a lasting solution. “We will look for experts that will give us a lasting solution to prevent further road mishap,” he said.

Appealing to governor Akeredolu, the traditional ruler of the university community, Oba Sunday Adeyeye, Ajimo III, commended the governor for his swift response and the timely visit.

He, called on the governor to consider constructing a dual carriage road in the community or creating an alternative road for heavy duty vehicles passing through the university town.

A resident of the community, Wasiu Afolabi,  called for an alternative route for heavy trucks saying that “these accidents can be prevented. We have lost many of our able men and women to road accident in this town.

“We want to appeal to the state government to either construct a dual carriage road for us in this town or we will prevent heavy trucks from passing this road;  we cannot continue losing our people to accident on weekly basis.”

Mrs Wuraola Aladesawe also lamented the incessant accidents in the area, saying “some few weeks ago, we lost some people to road accident in this town when a fuel tanker fell and caught fire.”

She appealed to governor Akeredolu to come to the aid of the residents and put an end to the carnage on this particular axis of the road which she said had claimed many lives.

Our federalism is too expensive —Hassan Sunmonu