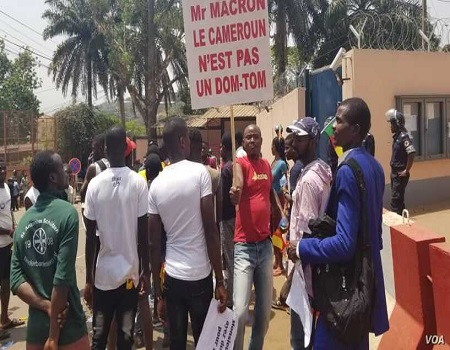 Cameroon on Monday protested criticism from French President Emmanuel Macron over how the central African state is handling the conflict in its English-speaking regions.

More than 100 mainly young people rallied in front of the French Embassy in Cameroon’s capital, Yaounde, yesterday, demanding an apology from the French President.

Alex Ndoumbe, a 30-year-old teacher, said they are not happy with Emmanuel Macron’s criticism of human rights in Cameroon and President Paul Biya’s handling of Anglophone rebels.

“We are protesting against what President Macron said concerning our country and mostly, a president of his caliber, he was not supposed to speak like that against a respectful country like Cameroon. A country which fought for its independence since 1960.  What we want from Macron is to ask for forgiveness to the president of the country and also to the entire nation of Cameroon. We will sleep here because we want him to ask for forgiveness immediately,” said Ndoumbe.

The protesters denied accusations they were organized or paid by Cameroon’s government.

Macron in Paris on Saturday described the human rights situation in Cameroon as “intolerable.” He was responding to a Cameroonian activist’s question about 22 civilians killed this month in the separatist conflict.

Witnesses said masked gunmen in military uniforms on February 14 launched a raid on a village, killing women and children.

Cameroon’s army denied targeting civilians and said it was fighting rebels when a woman and four children were killed by a fire in a rebel hideout.

Cameroon’s government spokesperson Rene Emmanuel Sadi in a press release condemned both the activist and Macron for what he called gross exaggerations and misleading words on the human rights situation.

But Biya’s critics agree with Macron and note human rights violations have plagued both sides in Cameroon’s separatist conflict.

“I support President Macron. There is a lot of human rights abuses, especially with the Anglophone crisis,” he said.

University of Yaounde international relations expert Elvis Ngole Ngole said Biya and Macron should talk so they can smooth over relations.

“Because of Cameroon’s geo-strategic position, I think France has a lot to benefit by keeping relations between herself and Cameroon,” he said.

Cameroon’s army has been fighting rebels since 2017 who want to create a breakaway, English-speaking state called Ambazonia.

Macron said he planned to call Biya this week and put maximum pressure on him to solve the conflict, which has so far left about 3,000 people dead and tens of thousands displaced.