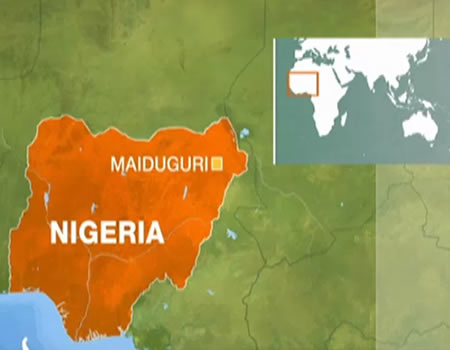 National Emergency Management Agency NEMA confirmed that one disabled person was killed in the suprised attack which sent residents of nearby polo, Didari, Giwa Barracks and environs scampering into Maiduguri for their lives.

After combing the area after first light by the military, NEMA said that several houses were burnt down by the insurgents who actually came in to cart away foodstuffs for the build up of their stocks which is needed to rebuild with the resurfacing of Shekau in a recent on line video.

NEMA said that the insurgents succeeded in carting away two hundred cows and well over three hundred sheep and goats in one flock taken to their hideout.

Several residents were injured during the sudden stampede while displaced victims have been provided with first aid.

Humanitarian needs assessment is being conducted to enable the mobilization of immediate relief assistance to the latest set of people to join the camp of IDPs following the burning down of their homes.