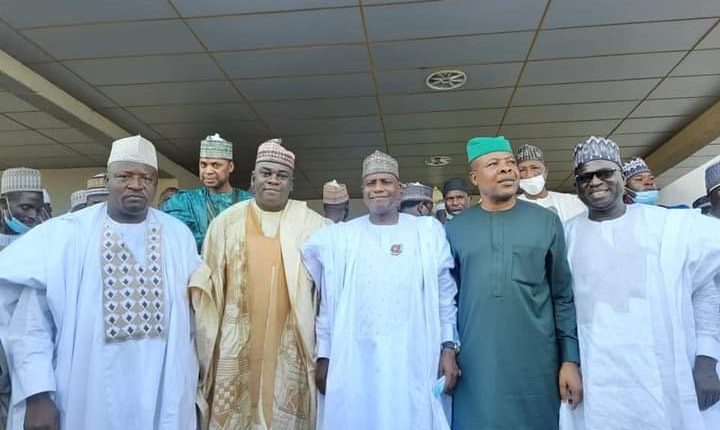 Likewise, Gov. Atiku Bagudu of Kebbi State, who gave out the bride, daughter of Sen. Umar Tafida, acquiesced to the President’s request and accepted a dowry of N250,000 from the bridegroom’s representative.

Represented by the Attorney-General and Minister for Justice, Abubakar Malami (SAN), President Buhari and Gov. Bagudu prayed for blissful conjugal union for the couple.

Notable personalities at the stars-studded marriage include the Deputy Speaker of the House of Representatives, Rt. Hon. Ahmed Idris Wase, the Minister of Police Affairs, Alhaji Abubakar Maigari Dingyadi and the National Chairman of the People’s Democratic Party (PDP), Chief Uche Secondus.

A press statement by the Special Adviser on media and publicity to the Governor, Muhammed Bello,Zainab said the Chairman of the Nigerian Governors Forum (NGF), Kayode Fayemi, led the governors of Bauchi, Enugu, Gombe, Jigawa, Kebbi, Kano, Plateau, Rivers and Zamfara were not left out

Taraba and Yobe State Governors were represented by their Deputies, just as
the former governors of Gombe, Imo and Jigawa, Ibrahim Hassan Dankwambo Emeka Ihedioha and Alhaji Sule Lamido graced the occasion.

Also at the wedding was Kashim Imam, former Minister of Police Affairs.

Business mogul, Aliko Dangote who was not at the wedding had earlier flown into Sokoto where he met Gov. Tambuwal privately. However, the Chairman of MaxAir, Alhaji Dahiru Mangal was at the wedding.

From the Ulama and the clergy were the National President of the Jama’atul Izalatul Bidi’a Wa Ikamatus Sunnah (JIBWIS), Sheikh Abdullahi Bala Lau and Bishop Matthew Hassan-Kukah of the Sokoto Catholic Diocese.