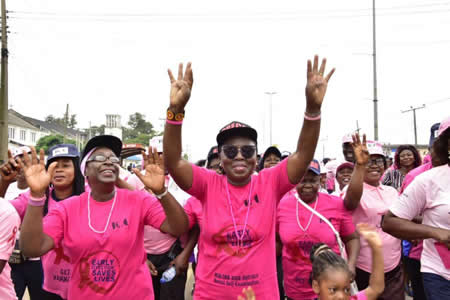 Listening to the survival story of Mrs Elizabeth Akande, a native of Owo, Ondo State, on how the husband abandoned her on realising that she had breast cancer and how Breast Cancer Association of Nigeria (BRECAN) provided moral and financial support for her to fight and defeat the disease, no one can tell what might have happened to her if BRECAN had not intervened in her case at the time it did to help save her life and give her hope that she could live a normal life again.

But BRECAN has a beginning. It did not just happen on us. The coming into existence of the Breast Cancer Association of Nigeria (BRECAN ), a non-governmental organisation, was borne out of the experience of Mrs Betty Anyanwu- Akeredolu, Ondo State First Lady, a breast cancer survivor, who rather than keeping what she knows about the dreaded disease to herself after fighting and defeating it, in her characteristic manner, decided to raise nationwide awareness about it and to also provide support for its sufferers with a view to minimising the disease in the country. At the time BRECAN was birthed, there was practically no coordinated effort to raise awareness about breast cancer in Nigeria.

Truly, as they say, a determined soul can re-write or change the history of the world entirely. This is exactly what Mrs Akeredolu is achieving through BRECAN. What if she had kept silent after surviving her own breast cancer? How other women who have benefitted from BRECAN would receive help? Perhaps they might have died and there won’t be any ray of hope for those who may be suffering from it now or those who may have it later. Little wonder BRECAN is all about giving hope and saving lives.

Founded in 1997, BRECAN’s mission is to eliminate breast cancer, provide robust advocacy about the scourge, give patient support and collaborate on areas of research, where necessary. Truth is, while the organisation may not have succeeded in eliminating breast cancer as it had set out to do initially, there’s no atom of doubt that it has provided a positive disruption in the advocacy ecosystem about the disease in Nigeria, provided and keeps providing financial support to patients as well as gets involved in efforts to deepen research about the treatment and management of the disease.

Twenty-three years down the lane, with eight chapters across the country, the mother chapter being Oyo State where it all started, BRECAN has not only become the number one leading breast cancer awareness campaigner in Nigeria, it has also carved a niche for itself in the global community due to the relentless activities of its founder and those of the NGO’s worthy partners – home and abroad – as well as the support of donors who keep supporting the various humanitarian interventions of the organisation. As of today, BRECAN is in collaboration with Society for Family Health, Medical Women Association of Nigeria (MWAN), Nigerian Association of Women Journalists (NAWOJ), including doctors in University Teaching Hospital, Ibadan (UCH), Obafemi Awolowo University Teaching Hospital (OAUTH), Lagos University Teaching Hospital (LUTH), and Federal Medical Center (FMC), Owo.

Prior to the establishment of BRECAN, at least taking into cognisance feedbacks from those who have benefitted from its array of interventionist initiatives, talking about breast cancer let alone admitting that one was suffering from it, was practically a taboo as a lot of people saw it as a spiritual or ‘juju’ attack in the past. Most of the times, rather than seek medical assistance, patients would rather go to a healing home (church or a herbalist place). Majority of them ended up dying in the process. Those who got treated maintained sealed lips on it.

Has the narrative changed now? Of course, it has changed for the better significantly as a lot of sufferers now acknowledge they have it and also do the best they can do to survive is by seeking medical intervention, though it must be said that cancer treatment and management still have a long way to go in the country considering the paucity of state-of-the-art medical facilities to attend to it and the lack of financial wherewithal by most of the patients to get quality treatment. It’s needless to say that there is a significant improvement in the awareness of the disease courtesy of the relentless and invasive campaigns of BRECAN on the need for women to check their breasts regularly as early detection helps in treating it. There still a long way to go, though.

Be that as it may, one major challenge that hinders the treatment and management of breast cancer in this country is a paucity of funds. To even worsen the situation, cancer treatment is not even covered by the National Health Insurance Scheme (NHIS).  But to fix this lacuna,  BRECAN has now launched what is called BRECAN Crowd-funding Initiative, a citizen-driven initiative, through which willing members of the public can now donate to a special account of the NGO all for the purpose of providing financial support to patients. So far, more than 18 women have now benefitted from the initiative with areas covered including Oyo, Imo and Abuja. Of course, Ondo State where Mrs Akeredolu is the First Lady, is number one on the list.

Just like the opening case of Mrs Akande, who is alive to tell her story of breast cancer survival today, several survivors like her abound who have been receiving help from BRECAN.  This year’s National Cancer Survivor’s Day celebration held in Akure, June 8, provided a veritable opportunity for some of them to tell their stories again. The survivors, who converged on BRECAN’s office during a media chat to commemorate the 2020 National Cancer Survivors’ Day, praised Mrs Betty Anyanwu-Akeredolu, founder of BRECAN and First Lady of Ondo State, for the initiative. Mrs Funmilayo Oluwagbamila, a breast cancer survivor, who also doubles as the state Coordinator of Team Survivor of Nigeria (TSN), an affiliate of BRECAN, said the initiative had changed the hitherto negative narratives about breast cancer in great measures.

She noted that the team was formed to give hope and support to those with the disease. She solicited financial support from members of the public so that breast cancer patients could access funds for treatment.

“Our team’s existence is evidence of BRECAN’s efforts. I want to let everyone here know that breast cancer is not a death sentence. I urge women to accept their diagnosis result each time they visit hospitals and take the necessary steps towards getting treatment. The truth is that the first step for survival on breast cancer is acceptance of diagnosis result while others follow.

Adding her voice to the campaign, Mrs Kehinde Eso, another survivor, hammered on the need for women to go for regular screening of their breasts as it helps in early detection of the disease which is very crucial in treating it. She explained that she reported and submitted herself to medical treatment early as well as adhering strictly to instructions by medical personnel.

On the role of BRECAN, Mrs Eso said that it has been providing help while giving hope to the hopeless in the state and in Nigeria at large. She commended Mrs Betty Anyanwu-Akeredolu for introducing BRECAN Crowd-Funding Initiative to financially cater for breast cancer patients. According to her, confidence and faith really helped her to survive the disease.

Meanwhile, a consultant surgeon with Federal Medical Centre, Owo and President for Coalition Against Cancer in Nigeria, Dr Katung Aba, who is also a great partner with BRECAN, said Nigerian society had believed so much lies about cancer generally in the past, stressing that people erroneously believe that breast cancer is a death sentence, hence they refuse to believe the disease exists.

Dr Katung enjoined members of the public to key into the crowd-funding initiated by BRECAN in treating patients of the disease who might not be financially buoyant. He enjoined TSN to get involved in government policies, saying that TSN is a veritable tool for championing the cause for reducing the menace of cancer in the country.

In his remarks, Dr Johnson Olaniyi, the Vice Chairman of BRECAN Ondo State chapter, said that BRECAN is a non-profit making organisation established by Mrs Akeredolu to eliminate breast cancer in the country through advocacy, awareness and sensitisation programmes.

“BRECAN came into existence before the advent of the current Governor, Rotimi Akeredolu led administration, hence it is neither a political nor a governmental organisation. We are only fortunate to enjoy the goodwill of Her Excellency, Mrs Betty Akeredolu which we have been using to touch many lives across the nation of Nigeria.

“For the record and for the sake of clarity, BRECAN created TSN in order to educate and give hope to those diagnosed with breast cancer. The 2020 edition of survivors’ day could not be celebrated with fanfare because of the COVID-19 pandemic. Let me say very expressly that breast cancer is real and not a death sentence but that early detection is key to treating or managing it” Olaniyi stated.

Similarly, Dr Emmanuel Onyema, the Secretary of BRECAN in Ondo State, appreciated BRECAN’s founder, saying that some people initially thought cancer had no treatment. Onyema said the essence of the celebration was to continue to create awareness that breast cancer was not tantamount to death and that there was life after its treatment.

He advised members of the public not to patronize herbalists or any spiritual leaders for treatment of breast cancer who might cause more complications. According to him, the organisation introduced a crowd-funding initiative to financially help patients of the disease, saying a donation of at least N200 per person is asked to be made to the association.

The BRECAN secretary, who said breast cancer was not caused by the devil, asked more support for breast cancer patients through the organisation.

As it’s the practice in advanced countries, government alone cannot provide everything for the citizenry. Where government defaults, NGOs and philanthropists come in to help fix some of the societal problems. BRECAN came in to fill the void about breast cancer awareness in Nigeria. And so far, the stories of its interventions have been quite amazing in spite of and notwithstanding the problems militating against it.

Today, through BRECAN campaigns, Nigerians now know that breast cancer is no longer a death sentence once detected early. Again, for the patients who can’t afford the financial wherewithal to treat it as Mrs Akeredolu once noted that the disease is a ”bloodsucker of income’’; BRECAN’s Crowd-funding Initiative will help go a long way in galvanising funds for patient support.  But then, the initiative won’t fund itself unless willing members of the public donate to it so that BRECAN can keep fulfilling its mission motto of saving lives and giving hope to the people.

Adeleye, a Lagos based Media Entrepreneur sent this piece via maxwelladeleye@gmail.com