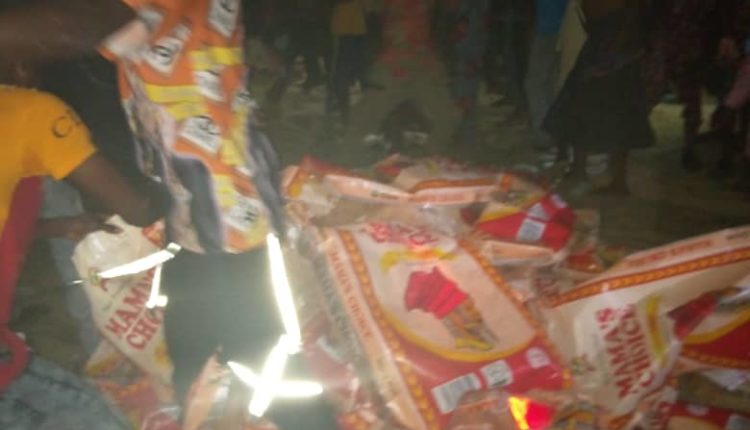 More than 10 people were feared dead in Akungba Akoko in Akoko South West Local Government Area of Ondo State, on Saturday night when the driver of a trailer lost control of the vehicle and crashed into a market.

The driver of the trailer which was loaded with bags of rice was said to have lost control and rammed into the market in Akungba Akoko, killing over 10 people and injuring many others. 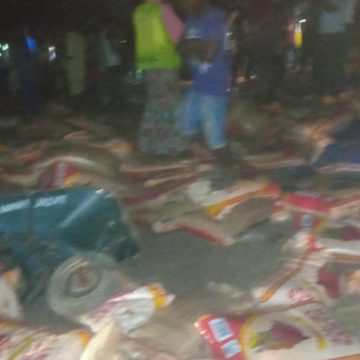 According to an eyewitness, the trailer was coming from Akungba axis of the town and heading towards Akure when the driver lost control and rammed into the popular Ibaka market in Akungba.

He said the victims of the accident who sustained various forms of injuries were rushed to the hospital while rescue operatives are still battling to remove some victims from the scene of the incident.

“The accident occurred at about 7.30 p.m., when the trailer loaded with bags of rice rammed into the stalls in the market.

“As I am talking to you, about 10 people must have been killed because we have removed dead bodies and many are still trapped under the trailer.”

The Public Relations Officer of the state police command, Mr Tee-Leo Ikoro, who confirmed the crash, said about eight persons have been confirmed died.

“As we speak now, eight people have been confirmed dead in the accident and we can still have more because we still have many people trapped under the trailer.”

The Sector Command of the Federal Road Safety Corps in the state was yet to confirm the incident as of the time of filing this report.

BREAKING: Adeboye Declares 30-Day Fasting And Prayer Over Situations In Nigeria
Apparently worried by the current situations in Nigeria, General Overseer of The Redeemed Christian Church of God (RCCG), Pastor Enoch Adeboye, on Tuesday declared a 30-day fasting and prayer across the country. Nigeria has in the past week been embroiled in a series of crises which started with the protest against police brutality now widely known as #EndSARS protest and also the shooting of protesters at the Lekki Toll Gate on…

NLC Tasks FG To Investigate Those Who Hoarded COVID-19 Palliatives
The Nigeria Labour Congress (NLC) has called on the Federal Government to investigate the conduct of government officials, who hoarded the COVID-19 palliatives and relief welfare materials and provisions, which should have been distributed to the masses during the…

UK To FG: Investigate Lekki, Bring Culprits To Book
The British High Commission in Nigeria has asked the Federal Government of Nigeria led by President Muhammadu Buhari to investigate all  incidents associated with the #EndSARS protests including that of Lekki toll gate. The commission in a tweet on Monday evening said it is also concerned over the spate of looting…

Senate Probes N848m, $1.5m Scandal In Foreign Affairs Ministry
The Senate Committee on Public Account chaired by Senator Mathew Urhoghide is investigating alleged financial scandal of N848 million and $1.5 million respectively by officials of  Ministry of Foreign Affairs in Tel-Aviv, Israel. The Senate investigation was a sequel to the report of the Auditor General of Federation, Anthony…

Lagos Attacks Meant To Weaken South-West Economy —Governors
GOVERNORS of the South-West states and ministers from the zone on Sunday toured public assets and private properties destroyed in Lagos last week and said the coordinated attacks had exposed the region to economic annihilation. Led by its chairman and Ondo State Governor, Mr Rotimi Akeredolu, the governors said the regression into savagery exposed the vulnerability of the South-West to manipulation by divisive elements bent on…

Lekki: The Story Of Bashorun Gaa
Everything Nigeria finds impossible to do, the Lekki protesters did. Orderliness, organisation, security, equity and equality. They forged peace and flaunted it with good music. They provided electricity for protesters to charge their phones. Food was available; there was water for all. There was no class, no creed. Everyone…

Tell My Mother I Was Unarmed
THE youth have spoken. Vox populi, vox Dei. Tired of seeing their future being mortgaged by philistines, our youth have decided to take their future into their own hands. We may neither understand nor even empathise with them; but we can never wish them…

I will complete all ongoing projects before leaving office ― Masari