2019: APC trapped in Zamfara, as INEC declares it ineligible to field candidates 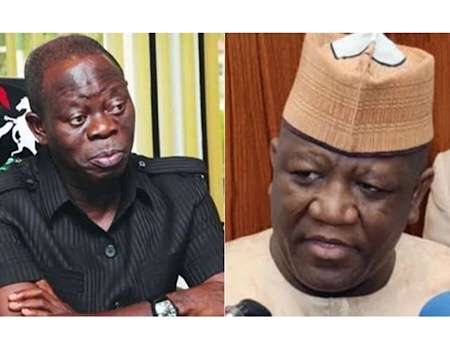 The battle for the control of party structures among chieftains of the ruling party, the All Progressives Congress (APC), has finally claimed its first casualties.

According to a leaked memo from the Independent National Electoral Commision, (INEC)  addressed to the embattled national chairman of the APC, Comrade Adams Oshiomhole, his party would not be eligible to field candidates for elective offices in the forthcoming general elections in Zamfara state, as it failed to meet up  with the Commission deadline on submission of candidates for next year general elections.

The memo signed  by the INEC acting  secretary, Okechukwu Ndeche, declared unambiguously that the ruling party failed to conduct primaries for elective offices and “will not be fielding candidates for the governorship, National Assembly and State Assembly Elections in Zamfara state for the 2019 for the general elections.”

The memo titled, “Failure To Conduct Party Primaries in Zamfara State Within The Stipulated Time Frame”, read in part: “You would note from the timetable that the conduct of party primaries is scheduled to take place between 18th August and 7th October 2018.

“Kindly also refer to the last schedule communicated by your party to the commission on the dates of party primaries nationwide, including Zamfara vide your letter Ref. APC/NHDQ/ INEC/19/18/51 dated 3rd Oct. 2018.

“However, report received from our office in Zamfara State shows that no primaries were conducted by your party in the state, Notwithstanding that our officials were fully mobilized and deployed.”

INEC further noted that its stance to declare APC ineligible to field candidates, was premised  on the provisions of Section 87 and 31 of the Electoral Act 2010 (as amended), and submitted that “the commission does not expect that your party will submit names of any candidates from Zamfara State.

“For clarity, our position is that the All Progressives Congress (APC), will not be fielding candidates for the governorship, National Assembly and State Assembly Elections in Zamfara state for the 2019 for the general elections.”

Nigerian Tribune findings revealed that the incumbent governor and aspirant for senatorial seat, Abdul Aziz Yari was locked in battle for the governorship seat with a governorship aspirant,  Senator Kabiru Marafa.

Governor Yari’s preference for his Commissioner for Finance, Mukhtar Idris, to succcede him, as against Senator Marafa was the genesis of the crisis that has led to APC ineligibility to field candidates for election in the North west state.