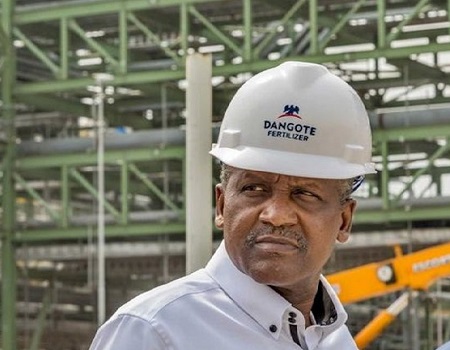 A contractor with Dangote Fertiliser company has been quarantined in Lagos State over coronavirus and is currently under isolation and undergoing a test in a hospital.

This will be the fourth case that will be reported in Nigeria as the third case of a lady who traveled from the United Kingdom was earlier reported on Tuesday morning.

According to the statement: “The attention of the management of Dangote Industries Limited has been drawn to a flash report of a suspected case of personnel currently being kept in isolation at the Mainland hospital, Yaba, Lagos.

“We will like to state that an Indian national who is a staff of Onshore Construction Company-a mechanical, electrical and instrumentation contracting firm that specialises in fertilizer construction reported at the site clinic complaining of high temperature and fever.

“His complaint triggered our protocols which necessitated further screening and isolation immediately. Mr. Akhil Kunyil, of the Health and Safety Environment of the Onshore Company, reported the development to the management following which local authorities were contacted.

“The patient was immediately conveyed to the Lagos Mainland Hospital Centre, where he is currently being isolated and undergoing tests.