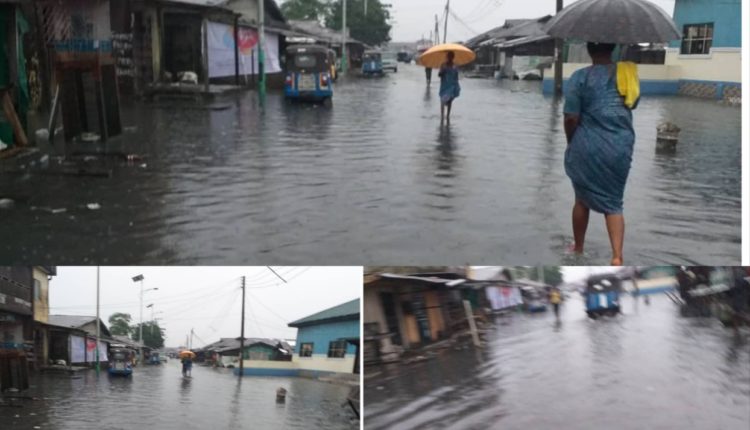 Share
A sustained downpour that started late Thursday night in Warri, Delta State, has sacked many residents from their homes, with household items destroyed in its wake.
No casualty in terms of injuries and deaths was, however, recorded as of the time of filing this report.
As early as 6:00 a.m on Friday, checks by Sunday Tribune revealed that areas like Ginuwa, Ometa, Inemejuwa, Okere, Robert Road, Marine Quarters, Ogboru, Eboh, Agbassa, Mission Road, Iyara, Cemetary Road, Estate, Odion and Stadium road all in Warri South Local Government Area were affected.
Areas in Uvwie LGA, such as Enerhen Road, Water Resources, PTI road and Airport junction, among others witnessed massive flooding.

The flooded roads and streets, an annual ritual, are largely products of unevacuated drainage and canals which are stuffed with plastic wastes and filth generated by residents.
Commercial activists were in a standstill for a better part of the day as affected residents rudely yanked off their beds, were seen at different locations bailing out water from their homes and shops.
Motorists, especially commercial ones, faced hectic time navigating some flooded parts of the Warri/Sapele road and streets as most of the roads were flooded.
Several owners of shops and market stalls could not trade until on Friday afternoon when the rains and floods began to recede.
With commercial activities partially paralysed, only scanty tricycles and minibuses defied the continuous rain to convey defiant commuters to their destination while many other residents were stuck in their homes, waiting for the rains that weren’t abating as of the time of filing the report.
Affected residents at Ginuwa area were seen evacuating their drenched belongings such as electronics, furniture, beddings, mattresses, rugs and carpets, among others to safer places.
A resident of Ope Street near Enemejuwa, identified as Area Man, who was spotted bailing water out of his room and parlour, told Tribune Online he had been bailing out water since midnight.
It will, however, be recalled that the Delta State government, through its Commissioner of Information, Charles Aniagwu, had earlier appealed to residents of the state living in flood-prone areas to evacuate ahead of the warning handed by the Nigerian Meteorological Agency (NiMet).