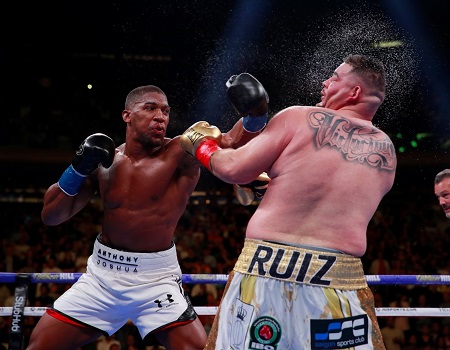 The heated match titled clash on the dunes saw Joshua gain revenge for his nightmare in New York earlier this year, when he fell four times in defeat to Ruiz Jr, by winning a unanimous decision in their rematch and clawing back the IBF, WBA and WBO titles.

Joshua drew blood from Ruiz Jr in the earliest exchanges after which he then suffered a similar cut in the second round, above his eye, although he remained poised and unhurt.

Joshua in his post-match reaction said “Shout out to the travelling fans. I’m just appreciative of the journey and for the fans that witnessed history. It’s about everyone involved and I’m just humbled. I know certain people had doubts but I didn’t.

“Don’t ever doubt yourself. Life is a roller coaster.

Andy Ruiz, however, the former champion claimed he had initially lost weight after his win but added weight blaming his weight for his loss. “I put on the weight and it was my mistake. No-one knows about the training we had. We did the best we can.

Ruiz, however, warned that he should not be written off as he still aims to be the world champion again.

“I think people are still doubting me. I am still a dangerous fighter to anyone in the division. At 100% I can dominate anyone in the world.

“You best believe I am going to come back and be the heavyweight champion of the world once again.”