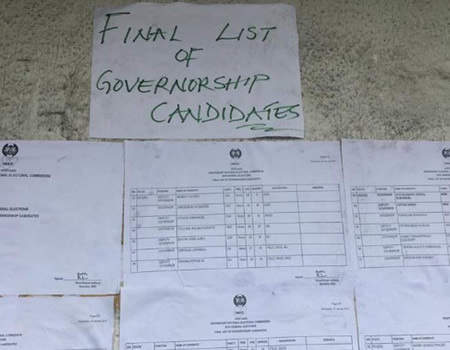 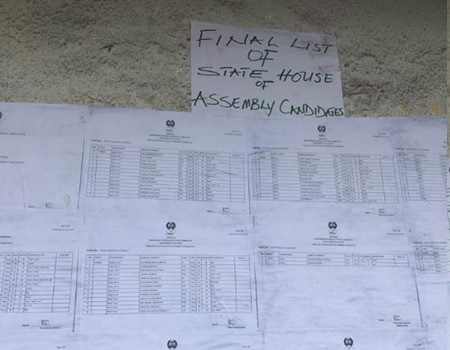 The names of candidates of the All Progressive Congress (APC) are missing out again, as the  Independent National Electoral Commission (INEC) released a final list of governorship and House of Assembly candidates in Rivers State.
Earlier, precisely on Thursday, January 17, INEC had released a list signed by its secretary, Rose Orianran-Anthony, which did not include names of candidates of APC, while it contained that of the Peoples Democratic Party (PDP), Social Democratic Party (SDP), and Labour Party, among others.
The factional crisis of APC members in Rivers State, which led to a legal tussle had caused a Federal High court in Port Harcourt, the state capital, to nullify the direct and indirect primaries conducted by the two factions of the APC in Rivers.
Delivering the ruling at the court presided over by Justice Kolawole Omotosho, the presiding judge held that both primaries of APC were not conducted according to the law.

Earlier before his judgement, Justice Omotosho, who had restrained the INEC from recognising Tonye Cole and Magnus Abe as governorship candidates of the APC in the general elections, voided the APC primaries saying they were not conducted as provided by the law.
At a factional direct governorship primary election held in 2018, Senator Abe was declared the winner after polling 144, 929 votes, while at an indirect primary election held by another faction, Cole emerged the winner with 3,329 votes.
But following the court judgement, the Resident Electoral Commissioner in Rivers, Obo Effanga, insisted that the electoral umpire would always obey court injunctions, the reason the electoral body is not recognising APC candidates in the coming polls.
APCINEC
Share

Don’t allow yourself be used for rigging, CAN charges INEC, security agencies

Attacks on facilities will not deter us from conducting election, says Yakubu