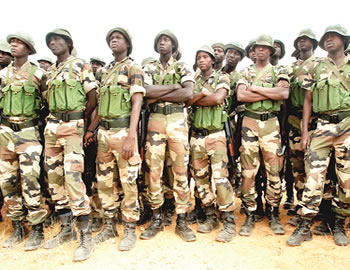 THE Chief of Army Staff, Lieutenant General Tukur Yusuf Buratai, has disclosed that over two million women and children including adult males have been freed from the hands of Boko Haram terrorists in the North eastern part of the country.

He said the progress was made following series of coordinated attacks and clearance operations conducted against the terrorist camps.

Buratai made the revelation on Wednesday in Abuja at an event organised by the Coalition of Civil Society Groups (COSG) to mark the 2016 United Nations World Peace Day.

He said the military has restored normalcy in most affected areas by the Boko Haram insurgencies in the north eastern part of the country while a final push to completely neutralise the terrorists is still ongoing.

In speech delivered on his behalf by the Chief of Civil/Military Affairs, Major-General Peter John Bojie, the Chief of Army Staff said the milestone could not have been achieved without the support of the Federal Government.

According to him, the political will, clear presidential directives of President, Muhammadu Buhari and backings received from all the tiers of government was responsible for the morale boost witnessed in the Military.

He said: “Before the current administration of President Muhammadu Buhari came on board, more than half of the entire northeast was dominated and controlled by the insurgent group with their flags hoisted in many local government areas and communities such as Konduga, Bama, Gwoza, Baga Abadam among others.

“On the whole, all the aforementioned moderate achievements would not have been possible without the support of the government which has never been unwavering since Mr President took over the affairs of Nigeria.

“It is also pertinent to mention the support of the civil populace and the media as key factors that contributed to the success story. It is however, instructive to state that the final push to completely neutralise the Boko Haram is still ongoing,” he said.

Speaking further, he said the military has so far been able to restore normalcy to most affected in the Northeast through its Quick Impact Projects.

Others include:”food and medical outreach to the IDPs in Baga, Cross-Kawa and sinking of boreholes in Bama, Buniyadi and other IDP camps within the states in the Northeast,

“A bakery was constructed in Kukawa LGA for the civil populace, renovation of schools amongst others in most of the librated areas were also carried out,” he added.

However, he charged civil society leaders to create strategies and slogans against terror campaigns even as they mobile support among various association and groups.

President of the Coalition of Civil Society Groups, Mr Etuk Bassey, Williams in his address called on Boko Haram sect and Niger Delta militants to embrace dialogue in order to allow peace and tranquillity in the country for development to take place.

He attributed the current economic challenges confronting the nation to the activities of these various groups, adding that the continuation of such rebellion would continue to breed death, poverty and underdevelopment in the country.

Williams said: “The need for peace in Nigeria cannot be overemphasised considering the fact that the absence of it has to the death of over 20,000 persons and displacement of over two millions in the last few years in the north east.

“In addition, the daily economic loss of about 1.3 million barrels of crude oil owing to the activities of the Niger Delta militants further attest to the importance of peaceful co-existence especially at a period when our dear nation is encumbered with several socio-economic challenges,” he said.