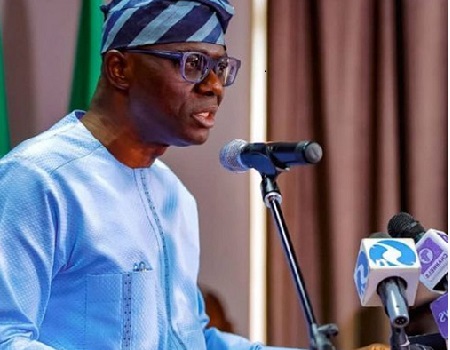 Gov. Babajide Sanwo-Olu of Lagos State on Friday said blocks of 113 classrooms in seven schools in the state were ready for commissioning.

Sanwo-Olu made this known in his Democracy Day speech tagged: ”Great Leap Towards A Greater Lagos.”

He said that education was the third pillar of his administration’s T.H.E.M.E.S Agenda, and investment in the education sector would continue toward a better learning experience.

”Ready for commissioning are also Block of 20 Classrooms at Ayanleye Memorial Primary School, Ifako-Ijaiye LGA and Block of 6 Classrooms at Ansar Ur Deen, Ibonwon, Epe,” he said.

Sanwo-Olu said that his administration had equally made remarkable inroad in the training of teachers for 21st-century competence.

He said that through the EKO EXCEL training initiative, 3,000 primary school teachers had been trained on how to competently utilise technology in teaching, for better educational outcomes for the children.

”The results have been amazing. Enrolment rates into our public primary schools have risen, while attendance rates have also improved remarkably.

”I have visited some of our public schools to see EKO EXCEL at work, and I am happy to report that we are on a transformative journey in public education in Lagos State,” Sanwo-Olu said.

In the area of technology, he said that with the current trend in the globe, his government was also keen on making Lagos the fortress of the digital enterprise.

Sanwo-Olu said that his administration was geared towards making Lagos State an urban hub of technology-driven creativity, innovation and commerce.

This, he said, would, in turn, become a magnet for domestic and foreign investment.

According to him, the government has set up the Lagos State Science Research and Innovation Council (LASRIC), with start-up funds in excess of $600,000.

”The fund is to drive investment in research and development of tech-focused solutions across the six pillars of our administration’s T.H.E.M.E.S agenda.

”With this structure in place, tech start-ups and young innovators in the state now have the opportunity and available funding to push their entrepreneurial skills to the next level,” he said.

Uninterrupted democracy, a testament of popularity and acceptance ― Gov Bello