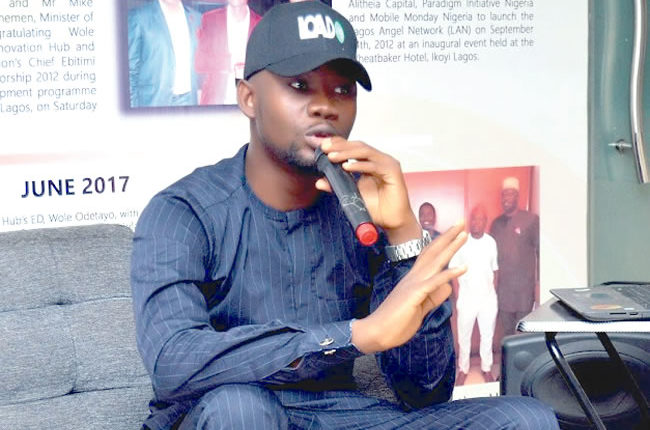 Tunde Aderemi Ibrahim, popularly known as TundeBuremo is the Chief Executive Officer (CEO) of LoadNG Automated Systems, a Nigeria-based cryptocurrency company expanding its reach in Nigeria and other African countries. In this interview with NIYI OYEDEJI, he speaks about the possible positive impacts of the blockchain technology on Nigeria’s fintech industry.

What is your business about?

I am Tunde Aderemi, the Lead Developer and Chief Executive Officer (CEO) of LoadNG Automated Systems.

LoadNG is Nigeria’s first fully automated cryptocurrency buying system which enables its users to exchange Bitcoin, Ethereum for local currency, thereby affording them to spend their digital assets just the way they’d like to.

You can exchange BTC for Naira through our website and mobile applications on Google Playstore as well as IOS app store. LoadNG is the most automated way of selling Bitcoin and other cryptocurrencies in Nigeria.

How did it all start and what inspired you?

There has been a gap between cryptocurrencies and fiat currency with respect to ease of spending, more worrisome was the challenge Nigerian creatives and freelancers were facing in getting paid for freelance jobs done for clients abroad.

This challenge was experienced first-hand by myself after I finished a web development gig for a client in the United states of America.He was to pay me $500 at that time, so he went to make the transfer directly through a Bitcoin ATM to my Bitcoin wallet, to my greatest surprise, more than $100 which amounts to 20 per cent had been deducted as charge. I was very discouraged until I was presented with another challenge of converting the already reduced Bitcoin to Naira. I lost the hard-earned coin eventually to scammers on the internet.Immediately I felt the pain a whole lot of other freelancers must have been facing in the hands of scammers and price volatility of cryptocurrencies as a medium of exchange of financial value.As a tech entrepreneur, I decided I was going to change the narrative forever.That was when the development of LoadNG began years back.

Tell us about the Blockchain Technology and its prospect in Nigeria.

Firstly, I’d like to correct the impression that Blockchain Technology is all about cryptocurrencies. It’s far more than that. A Blockchain is a decentralised ledger of all transactions across a peer-to-peer network. Using this technology, participants can confirm transactions without a need for a central clearing authority. The blockchain technology can be integrated to power almost everything in modern-day finance technology.Some of the areas where the blockchain technology have been utilised successfully includes fund transfers, settling trades, voting, and so on.

Blockchain is the technology that enables the existence of cryptocurrency, among other things. Bitcoin is the name of the best-known cryptocurrency (the one for which blockchain technology was invented) as there are other cryptocurrencies like Ethereum, Litecoin to mention a few.

A cryptocurrency is a digital medium of exchange that uses encryption techniques to control the creation of monetary units and to verify the transfer of funds from one block to the other on the chain (which makes blockchain to be literally just a chain of blocks).However,Blockchain Technology is the technology that powers the Bitcoin network and not versa.

Being an emerging sector in Nigeria and Africa, how impactful has LoadNG been in changing the narrative in Nigeria?

LoadNG, since inception has been able to live to its mission, which is to bridge the gap between cryptocurrencies and fiat currency in Africa.The aim is to give the same spending privileges to cryptocurrencies in such a way that enables holders of the digital assets to convert the value they have to their local currency without breaking a sweat, and this comes at several costs especially with the numerous positive impacts the solution has on making life easier for stakeholders in Nigeria’s freelance industry.

LoadNG right now is one of the largest exchanges in the country with its unique solution, more interesting is the level of automation the system works with, and we are glad to keep growing, thanks to the support of a great community and awesome users who love our services for its automation, speed and support.

What government policies do you think need to be changed or put in place for LoadNG similar start-ups to thrive in Nigeria?

The present landscape in Nigeria has given us the opportunity as a registered company to contribute to the growth of the overall economy. However, it’d be great to see the Central Bank of Nigeria come up with formal regulations and policies around the cryptocurrency niche, as it could be used as a vital tool to promote the present government’s cashless policy.

Also, the nation should explore opportunities in taking a frontal role in the adoption of its own Central Bank Digital Currency (CBDC), which is the digital form of fiat money as a high security digital instrument with technological efficiency as one of the major advantages.

How do you think the blockchain technology can positively impact Nigeria’s Fintech Industry?

The Finance Technology (Fintech) industry in Nigeria is taking great shape with the inception of solutions like ours and other fantastic solutions, but can do better if powered by Blockchain Technology.Increased transparency, accurate tracking, permanent ledger and cost/fee reduction are just some of the proven benefits of utilising the Blockchain Technology in Fintech solutions.

For example, at LoadNG, we have a bills payment solution fully integrated into our system which enables users to use their converted cryptocurrency to pay everyday bills.We have also ensured that aside selling PaxfulBitcoin, Blockchain Bitcoin or Bitcoin from other wallets on LoadNG, users can now exchange other cryptos like Ethereum for Naira on LoadNGwith the same full automation scope which means a user sells and receives payment automatically in a fully automated system. With tons of other features on our system, we are certain of leading Africa’s finance technology space in the race for complete utilisation of Blockchain technology.

What advice do you have for crypto enthusiasts and investors in Nigeria?

It’s high time cryptocurrency enthusiasts, as well as investors, started seeing the Blockchain Technology, not only for its cryptocurrency prospects, but also as a tool to solve problems in different sectors of the nation’s economy.

What would you say to young entrepreneurs in Nigeria?

I’d advice fellow entrepreneurs in tech to make certain that they are the best in whatever they do globally.It takes a lot of time, but with the right attitude towards learning with a lot of perseverance and consistency, you’ll be rewarded. As a company inspired by creativity and innovation, we have also started a LoadNG Talent Hunt, where we seek to reward creatives in Nigeria in this rather challenging time.The scheme’s maiden version 1.0 flagged off in May, 2020 in a bid to reward graphic designers in an online contest.

Entrepreneurship is never a smooth ride. It really entails being futuristic in one’s thought.You don’t have to do it the same way others are doing it.As an entrepreneur, you owe yourself the basic truth, do not allow emotions or what people would say cloud your judgments.

Also, very importantly, I would like to sound a wakeup call to youths in terms of proffering solutions to problems they can identify in a bid to contribute their own little quota to the all-round development of our great country, Nigeria.