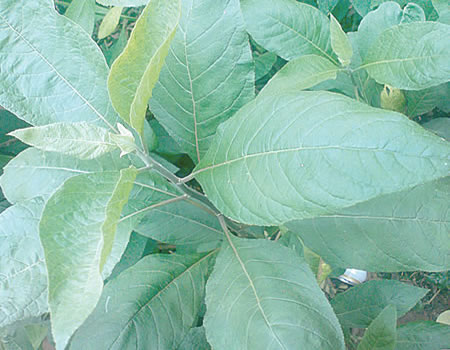 Cholera, an infection of the small intestine that causes a large amount of watery diarrhoea is endemic in Nigeria with most cases occurring in the rural areas. In South West Nigeria, some individuals resort to alternative treatments such as Ogi-tutu (Corn slurry), guava leaves and bitter leaf during infections.

In a new study, preliminary investigation on these alternative treatments of cholera found that these traditional treatment inhibiting the germ that causes cholera.

In fact, under laboratory conditions, bitter leaf gave the best ameliorative effects in the prevention and treatment of cholera infection.

Without treatment, the fatality of severe Cholera can be as high as 50. Unfortunately, in South-west Nigeria, majority of the people living in rural areas use traditional medicines to treat all types of diarrhoea.

Watery diarrhoea is the most common symptom of cholera, which can lead to dehydration and serious conditions if not treated timely. Other symptoms include stomach cramps, dry mouth, dry skin, muscle cramps, nausea, vomiting, low blood pressure, exhaustion, weakness and restlessness.

Regarded as traditional remedy for diarrhoea and specifically for the treatment of cholera, is the use of “ogi-tutu” and this is acclaimed to stop the characteristic cholera symptoms.

Ogi-tutu is the wet cake mixed with omidun (sour-water). Ogi is a porridge prepared from fermented maize, sorghum or millet in West Africa. In fact, experts indicate that Ogi may have potentials for treatment of diarrhoea, due to its high level of lactic acid bacteria (LAB).

Lactic acid bacteria have been shown to have antimicrobial potentials and it is significant in the management of human clinical infections.

Also, several plants are used locally in the treatment of diarrhoea. Guava and bitter leaf are two of such plants that are used in Southwest Nigeria.

Root and leaves of bitter leaf plant are used in phytomedicine to treat malaria, hiccups, kidney disease and stomach discomfort, as well as a worm expeller.

In the indigenous system of medicine, guava plant is used for the treatment of various human ailments such as wounds, ulcers, bowels and cholera.

For the study, the researchers considered the effects of Ogi-tutu, guava leaves and bitter leaf on the intestinal walls of adult mice. Prior to inoculating with V. Cholera, the germ that causes cholera, the animals were fasted for 24 hours prior to the experiment and were randomly divided into 10 groups, with three animals per group.

Raw extract of bitter leaf was obtained by crushing it. Decoction of guava leaf was prepared by boiling the shade dried leaves in water. However, Ogi-tutu, guava leaves and bitter leaf had varied ameliorative effects. Ogi-tutu, the study found was less effective in treating cholera.

The researchers reasoned that the bitter leaf gave the ameliorative effects in the prevention and treatment of cholera because of its many constituents such as saponins, alkaloids and flavonoids.

Involved in the June 2016 study, published in the African Health Science were Olufunke B Shittu; Olusola L Ajayi; Samuel O Bankole; and Temitope OS Popoola, all from the Federal University of Agriculture, Abeokuta. Ogun State.

Also, in the study, guava leaf extract displayed very high activity for the prevention and treatment of cholera when compared with the control groups.

However, the researchers said further investigations was required to understand how bitter leaf treats or prevents cholera.

According to them, “This might channel a new pathway and better alternative therapeutic agents in the management of diarrhoea associated with cholera.”

Moreover, in a clinical trial of patients infected with cholera, guava leaves showed higher potency than tetracycline. All these confirm the efficacy of guava leaves as an antidiarrheal agent.  Although extensive toxicity data are not available, the clinical trial showed no toxic effects.

Previously, experts have said that extracts of black tea has protective effect against the germ that cause cholera.  In 1991, the researchers reported in the Journal of Applied Bacteriology that tea extract also reduced fluid accumulation induced by cholera toxin in sealed adult mice.

Ginger, one of the most frequently consumed spices, similarly inhibits cholera toxins. Being a natural antibiotic, ginger helps to fight infection and cure cholera. It can also help to get rid of diarrhoea, stomach cramps and abdominal pain.

Indian researchers found that although ginger has no effect on the growth of the germ that causes cholera, it can block the action of cholera toxin.

The 2013 study, according to the Antimicrobial Agents Chemotherapy journal, suggested ginger as an effective adjunctive therapy with oral rehydration solution for severe diarrhoea associated with cholera.

Recently, some common spices such as garlic, red chilli and white pepper were found to drastically inhibited cholera toxin production from different strains of the germ that cause cholera.

In the 2010, researchers declared in FEMS Microbiology Letters that routine intake of red chilli, which is easily available and inexpensive, may be an alternative approach to prevent cholera.

Oral rehydration salt (ORS) solution is a commonly used therapy for cholera. Although the ORS solution effectively aids recovery from dehydration, the combination of ORS solution with medicines that suppress the severe diarrhoea or inactivate Cholera toxin would be advantageous.