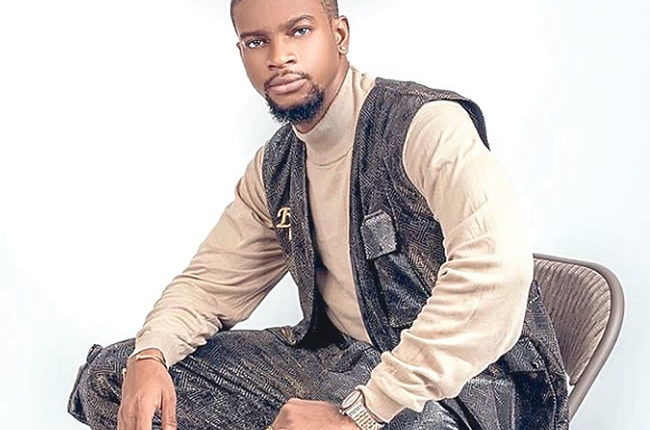 Olumide Oworu, a graduate of Mass Communication from  Babcock University, started acting at the age of six and since then, hasn’t looked back on the career path. The young actor, popularly known as ‘Tari’ has been on the set of the sitcom; ‘The Johnsons’, for nine years and  has several awards to his credit including the AMVCA Best Supporting actor category for his role in the Soldier’s Story in 2016. FAVOUR BOLUWADE brings excerpts of a chat with him about his career and growth process. Excerpts:

Why did you decide to be an actor? At what age did you discover this talent?

Well, I didn’t really think it was my thing at first. I had my first audition when I was six with the mindset that I was trying out and having fun. As time went on, I was modelling for corporate brands and I was doing radio jingles. My mom saw my acting potential and later on, we tried our hands on auditions. It wasn’t until I was done with the secondary school that I decided to become more serious and see how far I could take it. So, personally, I decided to be an actor in 2013. That was when I became conscious about my acting. I was acting on TV already but I wasn’t taking it as a long time career.

How hard or easy is it being a Nollywood star?

I think it is weird and hard; it was harder but it is a bit better now getting in as a young actor because before there were not so many roles for young actors. Generally, it is hard being in the competitive state with so many people trying to make it in the same line of work. It requires a lot of time, dedication, personal sacrifices, because acting takes up a lot of your time being on set, locations, going through scripts and there is just so much to do getting into characters.

Is the busy schedule your main challenge?

For me personally, juggling filming and academics together was and is my biggest challenge. It was really hard. In Nigeria; especially, schooling and working is hard to combine. There were many times that because of my schedules, I was faced with questions of if I would defer my admission or would drop out of school and face acting and or just being asked if I would finish school. There were times I would miss tests, get to exam halls late and I am constantly going up and down, travelling. I am thankful that I was able to get that part away. The other thing would just be getting roles as a young actor. There weren’t many opportunities.

Knowing how hard it was to get roles, did it cross your mind to leave the industry?

It definitely did. I considered dropping it really. But I am fortunate enough to be able to do both.

You are mostly known for acting in TV series such as SHUGA and The Johnsons. Has this affected you being featured in movies?

Not necessarily; but based on the nature of the field that I am on, I have to be a regular appearance for THE JOHNSONS because it is a daily show. That is a heavy requirement on my schedule because I have a big act and play a major role as in the Johnsons. So, I am on set a lot of times. Because of that, I can’t really be on set for as many other productions. But I don’t feel like people would not appreciate it if I were a part of other projects and productions.

You’ve been a face on The Johnsons for so long, are you not tired of filming that series or it has been fun all the way?

Just because it is a long running show though it is very possible to get tired; it is only natural for one to get tired. You know after filming for about six to seven months, you might just need the fresh air, change of environment, change of role- change from being Tari for a day. But it is a very lovely project. I am happy to be a part of it. I have been able to play the character for over nine years, developed the character, explored different aspects of the growth and now I am just having fun.

How did you get the role?

I auditioned for it.

What other roles do you wish to try then?

I am looking forward to being a villain. I really want to be the bad guy; the guy that just makes you wants to smash your TV. I feel like it is going to be very challenging for me to do that because I am coming from a place where I am mostly known as a good, nice, family friendly guy. So, well it would be fun to see the negativity. To be honest, the biggest thing for me as an actor is to be able to take up other roles, different ones. I don’t want to be in a box. I have to be unpredictable. It just depends on the actor you want to be. I want to push myself and be seen in a different light.

It is widely known that your mom is your manager, did this happen because you couldn’t trust anyone to manage you?

She was the one who saw the potential when I was two years old. She drove me to all my gigs and is always encouraging me to see where acting would take me. It happened organically because it could only make sense for her to continue what she had started. She was already doing managerial work from the onset. I have 24-hour access to my manager and she does a lot of great job. She is the best option even if someone else had to come on board; she still has to be supervisor. You even have to convince my mom, not me.

How have you been able to deal with the fame?

I take it as a normal job, like when people wake up and I am going to work, it is just how I wake up and go to work. I have come to understand that entertainment is a cycle; there will always be a new kid on the block at every point I am just trying to enjoy my time while it is still me. If I am in the position to inspire people, then that is a plus for me. I have been able to meet people by travelling and that is fun. But sometimes is overwhelming because some people get to meet you once and they leave with the first impression of you even if in a ten seconds window. Even on days when I am not really in the mood, I still have to be accommodating, though some people make it hard. It is just all about understanding and emotional intelligence. It is just all coming from a good place.

A lot of jobs I have been a part of are things that I auditioned for. It is just a little different now because I can get called for a personal screening with five people rather than a crowd of over 100. But then auditions are not just down to your acting abilities alone. Sometimes the best actor in the room might not be picked because they don’t fit into the picture of the character that has been created and might not have the look. You have to merge the looks and the acting at auditions. Audition is not validation that you are a good actor. But in life as well, if you can get a reference, it helps. But your reference would not work if you really can’t back up the reference even if you have been referenced by the best producers, you won’t get anywhere. No one would want to put up someone that would embarrass them. It is also your referee’s reputation that is on the line. Just be good and be growing.

You rap, model, and do a few other things, how is that coming for you?

My perspective changed when I lost someone very close to me four years ago. I just realised that it is all about how much I can inspire people. As many organisations I could work for, how many engagements I could have, I just want to make sure my life is an example. I want people to know they can do whatever they want to do. Dreams do come through. I had someone tell me she studied Mass Communication because I did and starting my career at a young age inspired her to know she can be the best. We will all pass away someday without the money and fame and all. Even if you are making a lot of money, how are you using it to influence people positively?

It was when I was nominated at the AMVCA at 21 years of age. I was the youngest on stage being with people I watched growing up clapping and celebrating me.  It made the stress worth it.

How has your family adjusted to your career?

Yes, they were supportive from the onset. My dad, who I lost at six, was even supportive when he was alive; despite knowing that entertainment was not his line. He was a leader in a band and he understood. The biggest thing for them was balance. I also had to move from UNILAG to Babcock University because the incessant strike was affecting my schedules; to study Mass communication. If I were not into acting, I would be in advertising.

Where do you see yourself five years from now?

Making music, I have always enjoyed making music, I feel like I am ready to do a lot with my creativity and work on my sounds. I had my first recording out in JSS 3 then with my company of friends at King’s College, Lagos. I always rapped then and I still do. My music is my way to connect with more people beyond the roles. People can have deeper connections with me as Olumide. People don’t even remember my name. I want my music to be out there; I will be more intentional with my music. But at the end of the day, I don’t have long term goals; I just live in the present. I am even looking forward to them. I know I will be getting awards though.

Single and open.  (Laughs) They will audition.