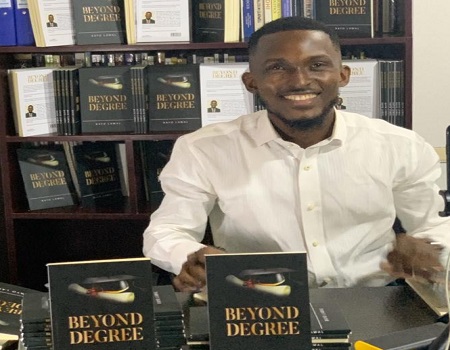 Bayo Lawal popularly known as Bayo Law launches his maiden edition book titled “Beyond Degree” on Saturday through a virtual meeting on his Instagram live.

Lawal who is a graduate of Kwara State University studied Political Science and is the founder of Enlightenment Platform; a forum that focuses on the growth of people, helps and loves humanity by constantly adding value to them. He doubles as the Strategy and Growth Executive and also the Executive Personal Assistant to the Chief Executive Officer of Dradrock Real Estate, Lagos.

The online programme which was anchored by Mr Lukman Shobowale (Author of Emerge) hosted eminent personalities as Mr Oladipo Agida, the CEO of Dradrock Real Estate; Taiwo Adebajo, Operation Manager at GPDL; Omotosho Raymond, a few to mention who respectively launched the book with an enormous amount of money.

According to the book reviewer, Timilehin Durotoye, a Distinction graduate of Communications and Language Arts in the University of Ibadan both in Undergraduate and Postgraduate levels, and also a Programme Coordinator with Leap Africa explained that there are eight chapters in the book and that each cut across leadership, network, association and self-development.

“In the book are thought-led inspirational words that can provoke self-development, leadership, and grooming of the desired network. There are also simplicity, elegance, clarity and evocativeness which form the major components of good work,” she maintained.

Also, Timilehin maintained that “Network is a key in growth. I am a professional that is driven by impact, and tangible results, of which association and influence can only push me to do more.”

Meanwhile, the Managing Director and CEO of Dradrock, Mr Oladipo Agida also co-reviewed the book, advising the youths that there is more to one’s certificate and as there should always be time for one to develop oneself.

“In the world of works today, it is really not about what you studied, although there are some clear professions that require one’s certificate(s), the major thing is having a set skills to pilot one above the other seekers or persons in the field. It is clearly beyond acquiring the certificate.” He stressed.

In his own remark, the author, Bayo Lawal appreciated the book launchers and Mr Taiwo Adebajo for buying 50 copies of the book for active participants on the live programme. He also said that “In the world today, the process is much better than the result, as the process will build one to be creative thinkers; Beyond a mere imagination of depending on your certificate lies unlimited opportunities when one creatively think.”

The session lasted for about an hour with over 500 live viewers via his handle @Bayo_law.