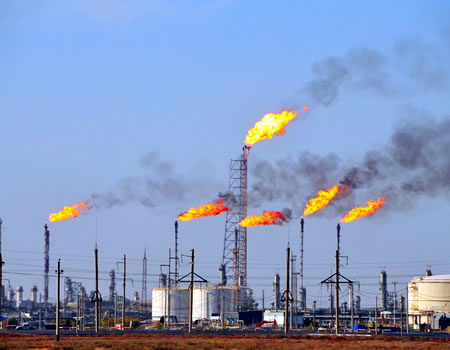 Nigeria has lost over $5.5billion to gas flaring between 2012 and 2020, data from the Gas Flare Tracker has revealed.

Gas flaring has in the last 36 years been declared illegal in the country, due to its environmental, health impact in the Niger Delta communities as well as its contribution to global warming.

The data obtained by Tribune Online revealed that in the last eight years, a total of 1.6billion Mscf of gas was flared, with 84.1million tonnes of carbon CO2 emission released into the atmosphere.

According to the data, the quantity of gas flared within this period has the potential to generate 160.6 thousand GWs/h of power.

As a result, the accumulated penalties payable by oil companies engaged in gas flaring within the period is put at $3.2bn, about N1.296 trillion, which is enough to cover for the N1 trillion intervention announced by the Central Bank of Nigeria(CBN) to support all critical sectors of the economy in the face of the COVID-19 pandemic.

Nigeria remains the largest oil producer in Africa and as of 2019, it ranked 13th in the world, producing around 1,999,885 bbl/day and over 4 billion standard cubic feet (scf) gas daily.

However, a huge chunk of gas produced daily is burnt every day across the approximately 180 flare sites in Nigeria.

As a result, President Muhammadu Buhari set up the National Gas Flare Commercialisation Programme — launched in 2016 as a major step towards Nigeria’s goal of ending gas flaring by 2020.

Although the global flare-out deadline is 2030 following the zero-flaring initiative promoted by the World Bank, Nigeria has a national target that seeks to eliminate gas flaring 10 years earlier.

There have been multiple attempts in the past to crack down on flaring, with an aim of ending gas flaring by 2020, 10 years earlier than the World Bank’s zero-flaring by 2030 initiative.

The Flare Gas(Prevention of Waste and Pollution) Regulations 2018, approved by the President, also provides a legal framework to support the policy objectives of the Federal Government (FG) for the reduction of Greenhouse Gas emissions through the flaring and venting of natural gas.

The Regulations prohibits gas flaring and venting and imposes the following fees: “$2.00 (Two United States Dollars per 28.317 standard cubic metres (one thousand standard cubic feet) of gas flared shall be charged as payment to the Federal Government for gas flaring by a Producer from any Oil Mining Lease area or Marginal Field that produces 10,000 barrels or more of oil per day.

“$0.05 (Fifty United States Cent) per 28.317 standard cubic metres (one thousand standard cubic feet) of gas flared shall be charged as payment to the Federal Government for gas flaring by a Producer from any Oil Mining Lease area or Marginal Field that produces less than 10,000 barrels of oil per day.”

COVID-19: Governors at NEC kick against imposition of health hazard allowance on…

Why Zamfara House of Assembly is sitting in primary school