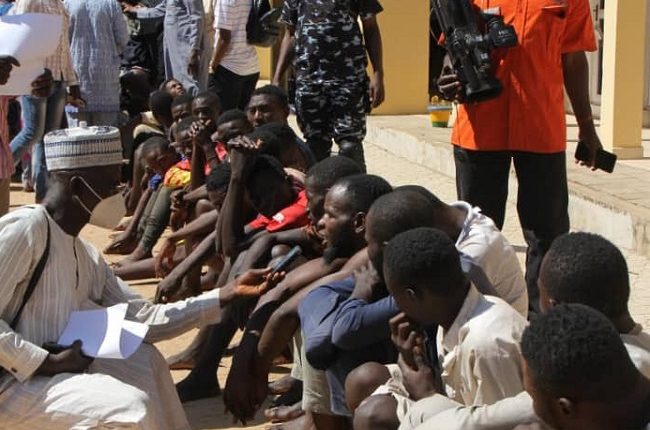 Bauchi State Police Command has bust the venue of a sex party, arresting 20 suspects believed to be organisers of the party.

While parading the suspected sex party organisers alongside other suspected criminals at the police command headquarters on Wednesday, the Commissioner of Police, Lawal Tanko Jimeta, said that the suspects were arrested following reliable information about their activities.

Represented by the PPRO, DSP Ahmed Wakili, the Police Commissioner disclosed that “Based on reliable intelligence that suspected criminal syndicates notorious for thuggery (Sara-Suka), phone snatching, and indecent acts including sex parties, were terrorising residents of the state, the command raised a team of detectives led by the Commander, Rapid Respond Squad (RRS) who immediately embarked on a round the clock operation which resulted in the apprehension of the suspects.”

He added that findings revealed that on the same day Bauchi police bust sex party to make their arrest at about 8:00 p.m, they conspired among themselves and organised a party suspected to be sex party with attendant series of atrocities within Dass town.

Also, on the 11th January 2021, at about noon, a joint team operation led by the DPO of Darazo arrested one Sadiq Isah alias Gojirgo, 25 years from Darazo LGA, following multiple complaints by the community against his conduct.

The commissioner explained that “Over the months, Sadiq was suspected to have criminally conspired with others now at large in attacking and terrorising the citizens of Darazo.”

He added that among their operations was a coordinated attack on 24th July 2020 at about 8:00 a.m. on the BSADP Darazo office where they killed one Babayo Hussaini 47yrs and one Chidawa Gyan-Gyan 48yrs both of Darazo L.G.A .

However, during the arrest, there was a serious struggle where the suspect resisted arrest and fought the police team before he was taken down.