‘Barry Back’ with new EP, continues pursuit of Barrister’s legacy 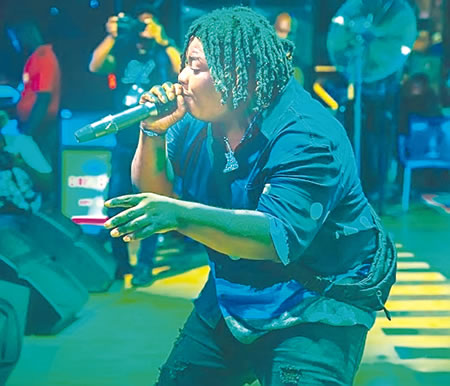 Fast rising music star, Oluwakayode Junior Balogun who is popular as Barry Jhay, released his maiden Extended Play (EP)about a week ago which he titled ‘Barry Back’ and it is a signs of things to come from the artiste who however continues to burden himself with attaining the heights his legendary father reached.

The artiste had a spectacular past year, with his songs some of the most listened to, according to charts. ‘Aiye’ is particularly regarded by music fans to be his biggest hitwith fans attesting to the song being one of the most played on their playlist.

Awards duly followed for the Ibadan-born musician as he bagged no less than two plaques; Headies’ Rookie of the year and City People music award for best new act.

This rightly put him in the spotlight of artistes to watch out for in 2020 and he has not disappointed after dropping his debut album. The glamour of the album is regarded by music fans to be the feature of Afro-pop star, David Adeleke, popular as Davido.

The reception that greeted the album especially on social media has been positive and the artiste was not been shy either in acknowledging positive reviews.

However, critics have continued to lash him for putting on himself the unnecessary yoke of trying to match his father’s legacy after the album was dedicated by the artiste to the memory of his late father.

His father, Sikiru Ayinde Barrister, widely believed to be the originator of fuji music, was a celebrated music icon who had over a hundred discographies to his name and toured the world with his brand of music.

Many are of the opinion that Barry Jhay should have ventured into fuji not hip-hop if he truly wanted to honour his father’s legacy.