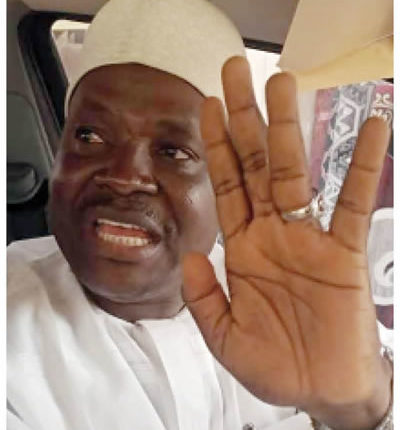 Honourable Idris Muhammed Gobir is a former chairman of Sabon Birni Local Government Area of Sokoto State. He is currently a special assistant to the Minister for Police Affairs. In this interview by OLAKUNLE MARUF, Gobir speaks on the security challenge facing residents of Sabon Birni and its environs.

Why do you think bandits have yet to be rooted out in spite of military operations?

They are still very much in the forests. The military has not been combating them properly. There are no military operations in most of the communities in Sabon Birni as we speak. In my area, there is nothing that would happen there that I won’t be aware of as a grassroots person. If anything happens in any of the villages, the people would definitely inform us. If they don’t inform us as APC leaders, they would definitely tell PDP leaders. No matter our political differences and wherever we are – with some of us having gone on exile and staying in places like Nasarawa, Kaduna and Niger states or here in the state capital – we still engage in talks with one another as we see ourselves as one.

Some residents of Sabon Birni and Isa local government areas have lamented that restrictions on mobile network services is hindering their ability to call for help when there is problem.

Yes, they cannot call for help simply because of that network issue. It was only last week that one of the networks restored service in Sabon Birni. We used to have all the four networks working in the area but now it is only one. There is no presence of other networks as I talk to you.

Were the withdrawals of the security personnel at the instance of the government?

We can’t say who gave the directives but the situation has to be looked into.

What is the wisdom behind the suspension of telecoms service?

It cannot be for the benefit of the villagers for any reason. When there was service, we normally used it to inform our people and security agencies the moment we heard anything about bandits. For instance, if we noticed the movement of bandits, especially from the bush, we usually warned the next village. By so doing, if they entered the village, they might not find anyone to kill. That is one of the benefits of telecommunications. I can tell you that the bandits are enjoying the telecoms shutdown because we cannot give the next village any information. To me, it is more to the benefit of these bandits.

As a stakeholder, what do you make of the difficulty in tackling the problem of banditry?

What are you doing to address the security problem?

There are only two things we can do because we are not in a position to arm ourselves and we can’t go against the law. Of the two things we can do, one is what I am doing right now, which is to talk and expose the situation; to tell the whole world the truth about our situation – the killings and destruction of our livelihoods. We can tell the world about unfortunate situation we are in. This is the darkest period in our history in Sabon Birni. We are really suffering at the hands of bandits.

The second thing we can do is to the security agencies with intelligence. Our communities do intelligence gathering. There is no single camp belonging to these bandits that Sabon Birni people don’t know where it is located. These people mobilise at will, move into our villages and attack us unchallenged, without resistance from any quarters. Even gone are the days when we had boldness to tell give the military information about the activities of these bandits. Everything is crippled now. Things have been crippled since the killings in the Burukusu military camp. The morale of the military men is down. Like I said earlier, we used to have the guts to tell the military that this is what is happening in a particular village. We cannot do that anymore.

There are reports of bandits taking over some communities in Sabon Birni. How true are the reports?

The reports are true. Apart from Gangara, there are many other communities under their control. As we are talking no fewer than 59 communities have paid fines to the bandits so that their people could move freely. Gadawa paid N500,000; Tundun Wada paid N1 million; Nasarawa, N600,000… You can see all these villages, 59 of them, with some having even paid up to three times. Gatawa is faced with another demand of N5,000,000 after they have paid N11,850,000 million. There is also Zango, a small village with a demand of N2,000,000 payment. About 70 per cent of these villages have paid these monies.

In Gangara, which is under Gatawa district, there are about 85 villages that are not engaging in farming because of the activities of these bandits. The communities have to pay about N25 million to the bandits. They are currently demanding another N27 million from the same Gatawa district. This has been confirmed by the district head.

And what happened next? They said, ‘among these five leaders (bandits), choose one who will become the leader and overseer of the community’. The villagers picked Hassan Dan Kwaro. He (Dan Kwaro) later mobilised about 30 motorcycles to enter Gangara. When people sighted him, they started running but he called them to ask if they were not the ones with whom they had a meeting. He said he was not there to attack them. He said as long as they abide by the agreed conditions, nothing was going to happen to them. He later ordered them to reopen their three Juma’at mosques which had earlier been shut down. He also ordered the reope markning of the village’s Tuesday market.

He is now in charge of the area. As I talk to you, that is the situation in Gangara. Another leader of the bandits called Boka went to a village called Makaruwa where he organised Maulud (observance of the birthday of Prophet Muhammad). After the Maulud, he gathered the villagers and asked them who their leader was. The real village head called Dan Sani stood up and said, ‘I used to be the village head but now, you are the village head’, referring to Boka.

So, tell me, are the bandits in control or not?

That is the current situation and they will not stop there. Since they have tried it and nothing happened to them, they will try with other villages. Nobody can stop them because the government is not willing to do anything.

Look at what happened in Anambra State during the last election. Just because of that election, you saw the number of security operatives that were mobilised, whereas I spoke to the Commissioner of Police the other time but he said they didn’t have the manpower but they suddenly had the manpower to go to Anambra for election duties. They cannot discharge a major duty of the government: protecting the lives and property of the citizens. We can say this before anybody and anywhere: our people in Sabon Birni are suffering.

For how long do you think things are going to continue like this?

I don’t know for how long because it has gone on for many years. Another bitter thing about this is that even the state government has not taken the necessary measures. In Niger Republic, how many people died there? But look at how they lowered their national flag in honour of the dead. But here in Nigeria, these people will kill 50-70 people and nothing will happen. Even the military personnel that we lost in Sabon Birni, has either the state or federal government done anything? Did they sympathise with the nation or the military, let alone their families? If a member of a community lost their life, nobody is concerned. Many things are terribly wrong in this country.

There are insinuations that some people in the affected villages are working for the bandits.

Yes, I agree with that. Their collaboration is even now official and I dare say that the government made it so. Are those people not being officially introduced into banditry? The answer is yes, because they have to survive. Security is paramount.

How many villages are located around Goronyo, Gundumi in Isa Local Government Area?

Gundumi Road traverses Wurno, Goronyo and Isa local government areas. The construction of the road, over hundred kilometers from Marnona Junction to Isa Local Government, has been abandoned.

There are at least three implications from the closure of the road. Imagine someone falling sick or a pregnant woman going into labour in the area or someone needing an emergency medical attention, you have denied them access to these services.

The second implication is when you leave the people over there with bandits, what kind of protection are you giving them? You are just encouraging them to become bandits themselves, because whether you like it or not, they will join them to survive. These people will never give information to security agencies otherwise bandits will come and kill them, rape their wives and do other terrible things to them.

The third one is, what provision has the government made in terms of their economic activities, their livelihoods? When you block them, what alternative solution do you offer them?

The problem of banditry is not a hidden thing again. Let the government admit that and tell the world the situation we are in. Let them consult professionals and seek advice on how to tackle this menace. If the military is not serving the purpose, let us withdraw them and bring in the police. Let us engage the service of the mobile police and give them all the support they may require, including armoured personnel carriers. Let us try mobile police for even a month and if they can’t serve the purpose, we should withdraw them as well.

We cannot continue to hide under military operations. Anywhere in Nigeria where there are military operations, especially my area, people are still suffering. Nothing is being done and nobody will stop me from complaining about this.

‘Big Stepper’ is me just being myself ― Rich Darlington

What I would spend a billion naira on •I started my first business when I was 10 —Blessing Ifegwu, entrepreneur, social media influencer

Nobody can defeat Atiku in the North —Oladipo

Adeleke is being underrated, but he will shock Osun people with good governance —Wole…

Until we amend constitution, we cannot achieve much —Sharafadeel Alli, Oyo South APC…