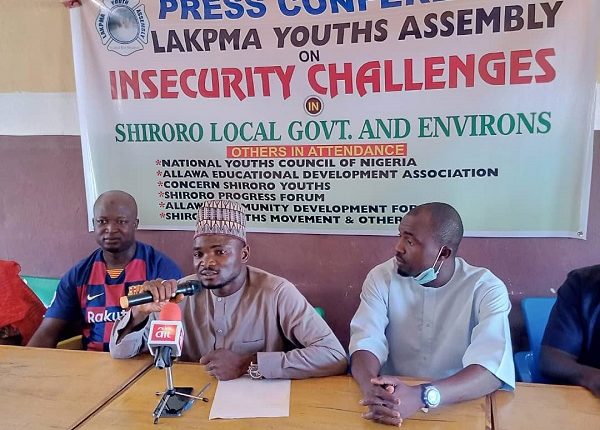 Allawa, one of the most affected communities by bandits attacks in Shiroro Local Government Areas of Niger State in recent times have condemned in stronger terms the Federal Government’s decision to withdraw Joint Security Operations in the state following the recent attacks and killings of Five Nigerian Army personnel and an Operative of the Nigeria Security and Civil Defense Corps( NSCDC) in the troubled area.

The President of Lakpma Youths Assembly, a socio-cultural group, Jibrin Abdullahi Allawa stated this, on Monday, during a Media briefing in Minna, the state capital, saying, “since the withdrawal of the Military and Para-Military personnel in the areas, that the bandits have been having a field day by virtually taking over no fewer than about 100 communities and looting their properties and carting the property to their camps in the forest.

Abdullahi Alawa further disclosed that Allawa and Gyaramiya communities were being invaded on daily basis and ransacked by the bandits, thereby making the people of the rural communities in Shiroro Local Government Area of the state and its environs very hopeless and stranded just as the leader of the youths described the situation as devastating.

He, however, called on the appropriate authorities to rescind the decision of withdrawal of Joint Task Force withdrawal from Allawa and Bassa communities and advocated for a radical approach by the government by urgently taking the war against bandits attacks on innocent citizens to the enclaves of the criminals.

He further appealed to the federal government for the establishment and reinforcement of the Joint Task Force in Kushaka, Kurebe, Manta, Galkogo and Kwaki respectively, noting that the banditry attacks started in Allawa communities in the year 2015 before it spread over to other parts of Niger State.

Allawa berated the Niger State government for abandoning them to their fate, just as he pointed out that the entire communities have relocated to the neighbouring Padongari community in Rafi Local Government Area’s Internal Displaced Persons (IDPs) camps where people were allegedly dying of hunger and without medical attention.

He explained that over 120 people had been killed, the entire community of about eight Wards out of the 10 wards were displaced just as over N100 million lost to ransom collections by the rampaging bandits, adding that with the current situation if solutions were not proferred to the ugly situation, the IPDs shall be mobilised from the troubled communities to occupy public facilities in Minna, the state capital at any moment from now.

In spite of the huge investment in the water sector by the government and international organisations, water scarcity has grown to become a perennial nightmare for residents of Abeokuta, the Ogun State capital. This report x-rays the lives and experiences of residents in getting clean, potable and affordable water amidst the surge of COVID-19 cases in the state. Bandits: Niger community decries Military withdrawals by Federal, Niger govts

2023: Only youth creativity will reset the nation ― Kogi commissioner