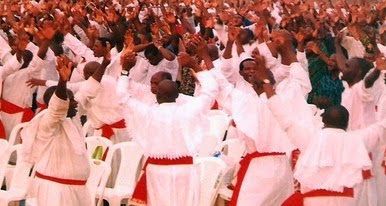 The Supreme Head of the Cherubim and Seraphim (C&S) Unification Church Worldwide, His Most Eminence, Prophet Solomon Alao has said that the nation’s  challenges, including banditry, corruption and religious intolerance were more deadly than COVID-19 pandemic.

He made this disclosure during the 2021 annual general conference of the C&S entitled, ‘Heal our land,’ held at the Solution Cherubim and Seraphim Ministry, Chosen Generation, Ibadan, Oyo State.

Alao, who observed that the year 2020 was described by many as ‘year of horror,’ contended that in Nigeria particularly, mortality rate could have been lower than the number recorded, noting that social viruses of banditry,  corruption and religious intolerance have also resulted in avoidable deaths.

He said: “over 1 million lives had been lost to the pandemic with Nigeria accounting for over 1,400. I believe that Nigeria’s mortality rate would not have reached this figure if we had fully observed all the protocols to confront the virus. I urge all not to let down their guards because it is not yet over. Unfortunately, the second wave of COVID-19 caught the nation in more devastating form, ill-prepared because of our usual ways of not being proactive.

“There are other viruses that are more deadly in our country. The medical virus is only a minute proportion of the other non-pharmaceutical viruses that we urgently need to find immediate cures. Some of the viruses are already cancerous,” he added

“The cancerous viruses are insensitivity of our political leaders to constructive criticisms; corruption which is sticking to high heavens; insecurity; religious bigotry and disobedience to constitution which clearly defines Nigeria as a secular state.

“Again in a secular state why should it be a crime if my neighbour is taking his meal in broad daylight in front of his house when I am fasting? Why should it be my duty to fight for God if anyone in his conduct seemingly shows disrespect to God and His revered servants?

Also, however, urged the Nigerian leaders to engage in self daily assessment by gauging public opinion against their conducts, stressing that “the various viruses which I referred to above are non pharmaceutical – Boko Haram has now overwhelmed our security apparatus.”

Proferring solution to the challenges, the Host, Prophet Gideon Owoseni, said, “For us as a nation, solution lies in being true to ourselves. But sadly, the truth is lost in every sphere of our lives, including the church and the mosque.

“We abuse President Muhammadu Buhari and late General Sanni Abacha but we all have our faults because we are insincere in our activities and as citizens of this country. Truth is lost in the church as well as mosques. People are being extorted. You get to market and honey is mixed with engine oil, yam flour is mixed with cassava flour just in a bid to make money.  Where is truth?”

PFN will always intercede for Nigeria, engage youths massively under my leadership…

Osinbajo To Pentecostal Fellowship: We Are Purveyors Of Justice, Voices Of Peace