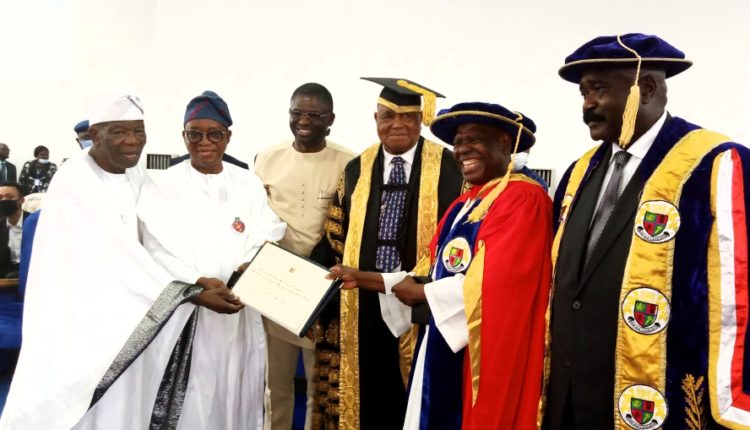 The need for a paradigm shift in African education policies to meet the challenges of the 21st century was the major theme during the convocation ceremony of Igbinedion University (UI) at Okada, near Benin, Edo State.

The trio of Edo State Governor Godwin Obaseki, former national chairman of the All Progressives Congress (APC), Chief Bisi Akande and Prof. Sarah Ayang Agbor, the African Union (AU), Commissioner in charge of Education, Science, Technology and Innovation who spoke during the 19th convocation ceremony of IUO all agreed on the need for reforms in the education sector in Africa.

Represented by the deputy governor, Comrade Philip Shaibu, Governor Obaseki said that African and Nigerian universities must move from mere status symbols to instruments of national development through research, advising that Nigeria must strive to fill in the gap in the education sector as Africa will only get it right if Nigeria makes it.

He maintained: “The new role we are advocating for the 21st century higher institution of learning does not mean that our university must be politicised but should help in creating an enabling environment to play advisory partnership role that involves research and information delivery.”

According to Governor Obaseki, Nigerians must be able to access and identify political, economic, and social issues and the aspiration of the society in order to design academic courses in line with local reality or challenges

He declared: “Our production of human capital development by our institution has been overtaken by the modern trends in education and should diversify to address national challenges like poverty, social dysfunction, low productivity, unemployment among others.”

According to the Edo State governor, the current education feedback in African has shown that the policies have not addressed the challenges hence the system needed to be reviewed.

Chief Akande who was conferred with an honourary doctorate degree in Political Science described education as a right of individuals that society and the government must provide for them.

The former Osun State governor promised to establish a School of Leadership at the university to train Nigerians in leadership skills.

The vice-chancellor, Prof. Lawrence Ezemonye, said the institution has since inception graduated over 15,000
undergraduate and postgraduate students.

In a speech titled “Higher Education and Career Advancement Opportunities in the 21st Century Revolution”, the guest lecturer, Prof. Agbor, maintained that African graduates must destroy unemployment by creating job opportunities that speak to national reconstruction and inspire the youth to be engaged in these processes through creating creational spaces.

She declared: “We have an opportunity to build sustainable structures to support our children, women, and youth. It is impossible to achieve the Agenda 2063 vision of an integrated, prosperous and peaceful Africa, whose development is driven by its own people, without increased and sustained investments in quality education, science, and technology as well as youth development and empowerment.”