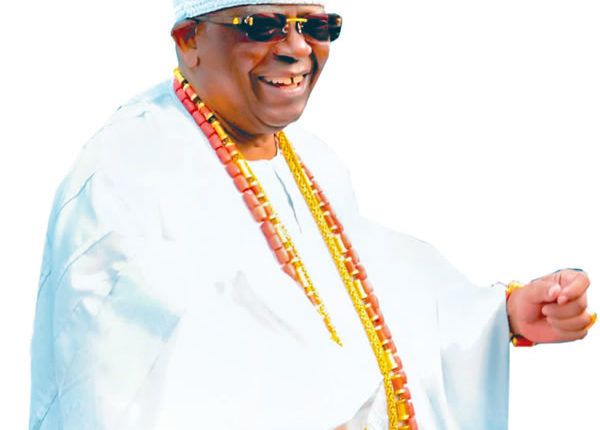 Ordinarily, his home after the usual church thanksgiving service to appreciate the Almighty God on March 9, would have been a gathering of family members, friends and who-is-who in Nigeria, to celebrate one man whose milk of human kindness, touching lives and impacting the length and breadth of the society, have seen no restrictions, but for the COVID-19 pandemic.

It had usually been so every year, the rolling out of activities, including generous donations to institutions and courses, investitures, felicitations, goodwill messages and more, in honour of a philanthropist extra-ordinary and a Nigerian, who leads in the act of giving.

It is his birthday this season and with social distancing in protocol, this year’s celebration has taken a slight departure, from the usual grand celebration for this scion of many good parts, Otunba (Dr) Michael Olasubomi Balogun, CON, progenitor of prime brands and source of many inspiring deeds.

Located at Ijebu-Ode in Ogun State, this monumental gift would no doubt add a rare boost to life, providing the best of medical attention to a much vulnerable segment of the society. There could not be a better way to demonstrate humanitarianism and true statesmanship than this obvious act of kindness.

The handing over ceremony of the facility was the consummation of the signing of a tripartite Memorandum of Understanding (MoU) that involved the Otunba Tunwase Foundation, the Management of University of Ibadan and the University College Hospital last October in Lagos.

The Group Chief Executive of FCMB and Chairman of the board of Otunba Tunwase Foundation, Mr Ladi Balogun, was apt in his summation at the ceremony.

“Today’s event marks a significant milestone to a philanthropic project embarked upon 11 years ago, with the sole objective of providing a world class medical facility to Nigerians, especially children, by an individual, who consistently craves for the social and economic development of his fatherland.

“As you are aware, Otunba Olasubomi Balogun is a well-known statesman, entrepreneur and philanthropist with several charitable projects and programmes for the people of his home town of Ijebu-Ode, as well as other parts of Nigeria. His philanthropy ranges from the provision of this world class medical facility to health, education, capacity building, youth empowerment and other socio-economic initiatives, aimed at enhancing the development of humanity and society in general.”

Otunba Balogun is a ready reference for good works, committed to making an impact on the lives and welfare of others. This, he has demonstrated over and again, with his succeeding flow of humanitarian support to people and communities. The sheer number and the value have made many to see him as the Nigerian watermark for humanitarianism.

Yes, it may be over twenty years now he took an uproarious bow from the banking hall, but his footprints still loom large there. The philosophies he enunciated and the course he pursued while prowling the banking chambers remain guiding principles for those desirous of making impact. For these reasons of rare ingredients in them, his story of life and forays in business, philanthropy, relationship still taste like a refreshing wine, laden with immense therapeutic values.

Beginning from his birth on March 9, 1934, in Ijebu-Ode, in present-day Ogun State, Otunba Balogun’s life has evidently aligned with a divine plan that has seen his name engraved in gold. It is instructive that Otunba Balogun is of blue blood, being a direct descendant of the Awujale (king of Ijebuland). Though born of Islamic backgrounds, he had converted to Christianity while in secondary school. An alumnus of the famous Igbobi College, Yaba, Lagos, he wrote and passed the equally prestigious Cambridge School Certificate in Grade One in 1952 and later the General Certificate Examination (GCE) Advanced Level.

The young Balogun jetted out of Nigerian shores in 1956, for the London School of Economics (LSE) to study Law, after a teaching stint at a secondary school. He was called to the English Bar in December 1959, following his graduation in June of that year and thus began a new spectre of life for this man that was to leave great impact in the different walks of life.

Whether it is in philanthropy or banking that he has made his greatest impact still, remains a matter of conjecture. What is obvious though is that he took time to solidify his early learning foundation and was later to be engaged by the Western Regional Government to receive special training in Legal Drafting in Whitehall and the City of London, with a particular specialisation in financial legislation, instruments and agreements. Another institution where he trained was the International Bank for Reconstruction and Development (IBRD), also known as the World Bank and its private sector affiliate, the International Finance Corporation (IFC), both in Washington DC. Some other personal development learnings followed his scouring fields such as stockbroking, investment banking and merchant banking amongst others.

The Asiwaju of Ijebu Christians served as a Crown Counsel in both the Ministry of Justice of the then Western Nigeria and as Assistant Parliamentary Counsel in the Federal Ministry of Justice in Lagos, the moment he was through that important sphere of learning. The story is well known of how he served for nine years, as Principal Counsel and Company Secretary to then reputable Nigerian Industrial Development Bank (NIDB).

Sometime in 1966, Otunba Balogun joined the Nigerian Industrial Development Bank (NIDB). While at this establishment, his interest in investment banking led him to advocate for the establishment of a merchant bank sponsored by NIDB. When ICON securities, a merchant banking outfit was established in 1973 as a subsidiary of NIDB, Balogun moved to ICON Ltd as a director of operations. When Balogun’s ambition to head ICON was not realised, he left the firm to found City Securities, a stock broking and issuing house. City Securities developed relationships with Mobil, Texaco and Total Petroleum Marketing companies, handling the companies’ equity offerings.

In 1979, he applied for a merchant banking license to establish First City Merchant Bank. Balogun was inspired by the entrepreneurial works of Siegmund Warburg, who co-founded S.G. Warburg, he had visited Warburg in London prior to establishing his merchant bank. He often tells the anecdotal story of how his son inspired him to take the leap in starting the bank. When the operations of the bank took effect in 1983, Balogun established an entrepreneurial culture at the new bank, unique as an owner managed bank in contrast to the government owned banks as at that time.

Amongst the several landmarks in his life was 2004, when the Central Bank of Nigeria declared a new minimum share capital of N25 billion. He had retired from active banking service at this time, but he saw the new bench-mark as a challenge that must be overcome, retirement from the banking hall, notwithstanding. So methodically aggressive in the quest to shore up public subscription was that Balogun came out of retirement to lead the campaign. With his influence and drive, the company’s issued shares were oversubscribed, even as FCMB ended up acquiring six other banks that were unable to meet the requirements.

At a very early stage in life, his magnanimity began to attract a lot of recognition. A direct descendant of Oba Tunwase of Ijebu-Ode, Otunba Balogun is the holder of the title of the Otunba Tunwase of Ijebu. He is also the Olori-Omoba Akile Ijebu, the Baba Oba of Ijebu-Ife, the Asalu Oba of Ijebu-Mushin and the Asiwaju of Ijebu Christians. As the Olori Omo-Oba or ‘chief prince’- of Ijebu, he serves as the ranking prince of the dynasty that provides the Awujales of Ijebuland. His recognition, from the South West Nigeria, extended to the South East, Northern Nigeria and as far as Europe, Italy to be precise. As the head of princes, he is at the helm of affairs as The Olori Ebi of the Arojojoye Ruling House, in Ijebu Ode.

Otunba Balogun has several awards in his kitty. He is a recipient of the American Biographical Institute Inc’s Distinguished Leadership Award for outstanding contributions to the development of Investment Banking. He is also a recipient of the University of Ibadan’s Degree of Doctor of Laws (Honoris Causa) in recognition of his outstanding achievements both in the field of Law and his contributions to the socio-economic development of Nigeria; a Merit Award for philanthropic services to Ogun State in particular and the country as a whole, and also the Ijebu Development Association award and Council Membership of a number of multi-national Chambers of Commerce. The Chartered Institute of Bankers of Nigeria made him a fellow of the Institute for his pioneering and outstanding contribution to the banking industry.

There is no gainsaying the fact that Otunba (Dr) Michael Olasubomi Balogun, CON, the Founder of FCMB Group and the Olori Omo-oba of Ijebuland has reached an altitude in life that is shaping his attitude of gratitude to God. At age 87, his conviction that he has a duty to devote the rest of his life to serve God, society and do things that add significant value to humanity has continued to wax strong. As he often says “when the final call comes, you will just open your hands and say, God, here I am and to be able to do that, you need the grace of God.”

Indeed, Otunba Balogun has grown to gracefully become an outstanding personality, a great phenomenon and embodiment of achievements within his immediate environment and far beyond. His story is that of a man who understood early in life that the true essence of wealth is achieved only when it is deployed to the service of humanity, especially the less privileged. A man of proven immense wealth who is highly regarded, respected and honoured in the society, the honour bestowed on Otunba Balogun does not, however, stem from the immensity of his wealth, but from the good use to which he has put this wealth for the service of humanity.

Over this period, he has garnered many epithets and appellations which present him as a colossus bestriding every aspect of national life. Otunba Balogun is the baron of the Nigerian capital and money markets; doyen, pioneer and role model of entrepreneurial banking in Nigeria; a constructive philanthropist and a distinguished Church Leader, who has devoted a substantial part of his private resources to the care and service of the less privileged.

A lover of children who has built several institutions for the health care, welfare and survival of children, Otunba Balogun is also a distinguished author, opinion leader, writer and a respected community leader whose contributions for community welfare continue to expand even as he grows older.