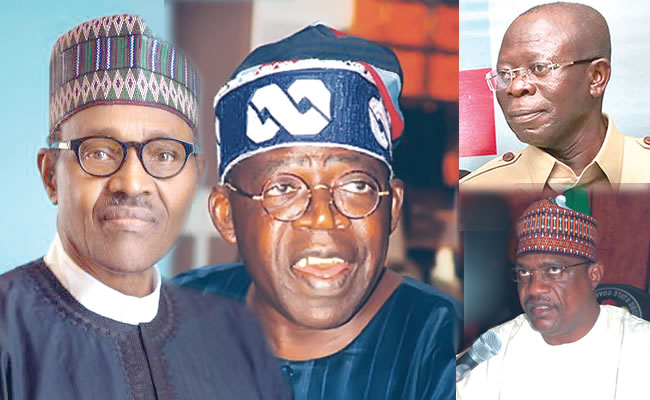 INTRA-PARTY crises threatening to tear apart the ruling All Progressives Congress (APC) have worsened due to the ongoing membership registration and validation exercise in all state chapters.

The exercise reportedly didn’t take off at the Federal Capital Territory (FCT) chapter alongside others due to unreadiness of its coded registration documents. While the exercise is without serious hitches in some state chapters, rancorous contestation has trailed it in a couple of chapters.

In Kwara and Delta state chapters, forces belonging to different power centres have been going at it with fervour and those considered to be losing out in securing enough numbers to retain political values in their respective domains are not keeping quiet.

Most notable is the Kwara State chapter where the Minister of Information and Culture, Alhaji Lai Mohammed, has been crying foul over the alleged marginalisation of his loyalists in the exercise.

With the party’s congresses and national convention to follow almost immediately after the registration/validation exercise, whoever gets to register fewer party faithful is technically out of reckoning in his base since party executives, down the line, would be determined by party members based on the ongoing exercise.

Beyond the state chapters’ crises, a bigger crisis tugging at the heart of the party and its future is already brewing, Nigerian Tribune has learnt.

It was learnt that what is being observed as quietness in many state chapters is nothing but a graveyard peace, with a major group in the party reportedly participating in protest.

Two former national chairmen of the party, Adams Oshiomhole and Chief Bisi Akande, as well as the national leader, Chief Bola Tinubu, have individually expressed strong reservations about the exercise, with Oshiomhole practically tagging it unconstitutional. In Osun, Lagos and Edo states where the trio are the undisputed deciders, the exercise appears to be on a smooth run but Saturday Tribune’s findings showed that it was being conducted against the run of play.

This is said to be the situation with their loyalists all over the country, especially for Oshiomhole’s supporters, who are reportedly still smarting from his untimely exit from the headship of the party. A senior party source told Saturday Tribune that it would appear that supporters of Oshiomhole and Tinubu have been instructed to continue participation in the exercise despite the rejection of same by their leaders.

It was further learnt that the choice of the leaders to slam the exercise in the course of their participation in it was a deliberate move to signal their supporters nationwide to participate in protest.

A party chieftain who operates deep in the national headquarters told Nigerian Tribune that the leadership was aware of the alleged plot by some leaders to use the exercise to weaken the party from the inside before bolting to other platforms. These angry leaders, settled in their conviction, that the registration/revalidation exercise was targeted against their continued relevance in the party, were also alleged to be planning a staccato of suits, to scuttle both the exercise and the congresses/national convention and throw the party into fresh nationwide crisis.

Already, a coterie of lawyers is reportedly advising the aggrieved on a number of things, including the kind of suits to file and where to file them.

A suit to challenge the validity of the ongoing exercise, particularly the aspect of new registration for existing members of the party, is already settled on, according to a source in the know. Another suit is also expected to ask for a stoppage of the congresses and convention until the legality of the removal of all elected party officials by the National Executive Council (NEC) before the lawful conclusion of their tenure is determined. The alleged illegality of the registration/validation exercise is also being primed as a reason for another suit to stop the congresses and convention.

The multiple suits are to be filed by different individuals in and from different states with a gubernatorial aspirant in a South-East state expected to be a vocal litigant.

He used to be an activist and the incumbent governor of the state isn’t of his party.

Already, disadvantaged groups in some contentious state chapters are preparing their reports to challenge what would come out as party registers for their states. The protest is planned for the national headquarters, not the judiciary, where they would be demanding forensic examination of information credited to many registered as party members in their state chapters. There are accusations that fictional members are being registered by groups in control of the exercise to gain advantage over others not fraternising with the dominant groups. Of particular note is the focus being given the extra registration booklets being demanded by mainstream party leaders of some state chapters which those in opposition claim are being used fraudulently to make up the numbers in order to claim political dominance.

Due to the persistence of some state chapters, the interim national leadership of the party decided to increase allocation per state to 200 forms per PU (Polling Unit) from the initial 100 to create a nationwide balance. The February 23 deadline for the exercise is also likely to be shifted, though some chieftains are pushing for conclusion-as-scheduled, arguing that membership registration is naturally a sustained process and the ongoing emergency exercise, when concluded as scheduled, won’t shut anyone out.

The anti-extension forces do not want anything to jeopardise the lined-up activities of the party, designed to culminate in the emergence of new elected party officials, from national to local. Nigerian Tribune is privy to an appeal being put together by a factional group in a Southern state to challenge some membership slips without photographs as demanded by the registration regulation. Some of the filed slips are also alleged to be bearing non-existent names with passport photographs of those herded to the registration points through inducement and coercion to have their shots taken by stand-by photographers hired by party chieftains. These forms are also being deemed fake.

Registration officers sent from Abuja are reportedly overwhelmed and could do little to halt the alleged fraudulent drift. Heads of two directorates of the party in Abuja are also said to be under the radar for alleged collusion with certain elements of the party in the South West to sink the party over alleged marginalisation. One has always been with the South West group in the days of the legacy parties.

The other is reportedly being wooed to the side of the disillusioned chieftains by a minister from the zone. The minister is said to have taken over the role of ‘Mr Fixer’ for the group that was being formerly handled by another minister who had a falling out with the overall boss. The group accused of being part of those stuffing the new party register is allegedly working to secure majority status in three key South West states and move out at the zero hour when their exit would create a huge crisis for the party nationally. The planned exit is said to be a revenge strategy used against them in a recent gubernatorial election in a Southern state. New platforms are reportedly being considered, though nothing is said to be conclusive and registration of a new party isn’t also featuring heavily in their plans. The legacy parties can’t also be resuscitated until a decade’s time.

Why we won’t withdraw military from Orlu —Gov Uzodinma