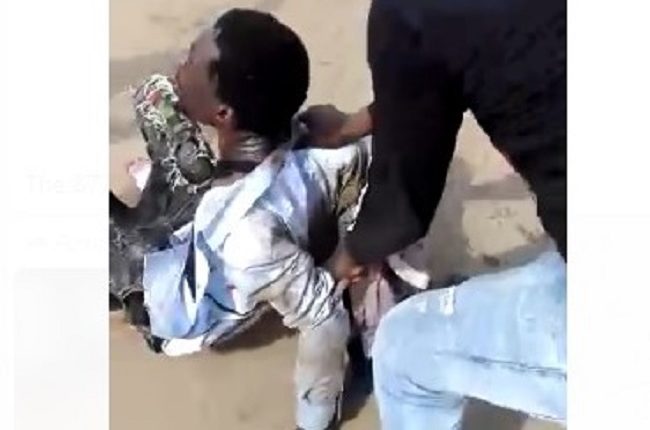 It was a gory sight to behold in the Second East Circular area of Benin City, Edo State capital, as a young man who was caught with a locally made cut-to-size pistol had his legs mangled, preparatory to being necklaced.

In a one minute and 58 seconds video of the incident shared on various social media platforms in the ancient city, late Saturday evening, the young man was seen with his hands tied to the back to demobilise him.

While he was being held by one of the mob, another was seen emerging with a heavy plank.

On sighting the plank, and with the prompting from the motley crowd shouting, “break the legs”, Tue apprehended young man made fruitless spirited efforts to escape but he was incapacitated by the manacles on his hands, just as he was tightly held by his ‘arresting’ member of the crowd.

Moments later, the man with the plank dealt deadly blows on the legs of the suspected armed robber, while the crowd kept asking for the mangling of the legs. His cry of agony did not dissuade the crowd from inflicting more pains on him.

As the suspect fell down, a used tyre was seen nearby, while someone in the crowd asked that the suspected armed robber should be doused with petroleum, saying, ” make una put fuel”

Benin City, in the last three weeks, has been sitting on the edge as armed robbers and other criminal elements operate with impunity, even broad daylight.

The security breach in the city got compounded on Wednesday when two rival cult groups, Eiye and Aye, launched a battle of supremacy in the state capital.

From Upper Sokponba Road to Silouko, Ugnowo to Isior; Ogbe to Sapele Road, it has been a harvest of deaths and great mortality as members of the confraternities go after one another.

While an Assistant Commissioner of Police, ACP who happens to be an Area Commander in the Edo State Police Command, was fatally shot alongside two other policemen on Upper Sokponba Road on Friday morning, a medical doctor attached to the Central Hospital, Benin City, Maxwell Orosanye, was shot on Saturday at Mobil filling station along Siluko road and his Toyota Corolla car snatched from him.

Not fewer than twenty-eight people have been killed in the renewed cult clash in the Benin metropolis in the last one week.

Just on Saturday afternoon, the Stage Commissioner of Police, Mr Johnson Kokumo, announced that policemen in the state, especially those who served as Investigating Police Officers, IPOs, and secured the conviction of some prisoners who escaped from the two Correctional Centres in the city, had been receiving threat text messages from the escapees.

Three kidnappers of Reverend sisters in Ondo to die by hanging

#EndSARS: Lawyer calls for judicial panel of enquiry on police attacked during crisis