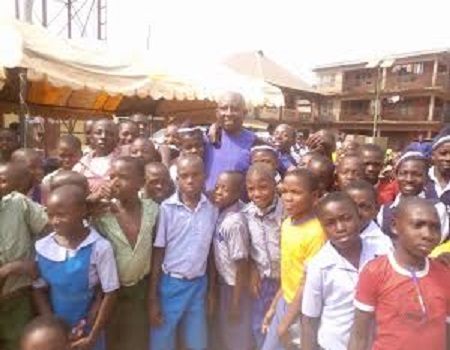 The Lawmaker Representing Anambra West in Anambra State House of Assembly, Hon. Patrick Obalum Udoba has donated some educational enhancement materials to schools to aid teaching and learning in his constituency.

Hon. Udoba made the donations yesterday, during the flag-off of 2020 edition of Anambra West students-back-to-school initiative at Umueze Anam Town Hall, Anambra West council area of the state.

Nigerian Tribune gathered that the lawmaker distributed about 11, 000 exercise books, 5, 000 bundles of pen and pencil, including other study materials worth thousands of Naira.

Presenting the materials, Udoba expressed joy at the turnout, saying that the measure was aimed at enhancing performances of the pupils and to assist parents.

According to him, laying a good foundation for these pupils is very important, especially at the primary level.

He said that it would give him joy to see the children grow to useful adults.

The lawmaker said the gesture was borne out of his belief that education was key to human development, stressing that it was important to catch them young.

“Education is key for any meaningful development, if you educate children, you will have a better society.

“That is why I take it upon myself to support them at the primary school level by providing reading and writing materials to motivate the pupils to relieve their parents from their responsibilities.’

He then, noted that leadership was about making a godly impact on the lives of the people, noting that the initiative would be an annual affair.

“I will continue to serve the people to justify the mandate given to him to represent them in the state Assembly.

“Next edition we will expand it further to accommodate those at the secondary level,’’ he said.

Earlier in a welcome address, Education Secretary Anambra West LGA, Mr Joe Udeoba described the gesture as highly laudable, adding that education was the best legacy to give a child.

Mr Udeoba eulogised the lawmaker as a philanthropist, who has shown quality representation in just a few months at the Assembly.

He explained that the gesture would impact positively on the lives of the pupils and relieve their parents of some responsibilities.

“He has been so supportive to teachers and students in Anambra West. Through this gesture, he has actually opened the door wide open for others to join in promoting quality education in the LGA.’’

He thanked the lawmaker and the governor for their unparalleled magnanimity toward students and teachers, appealing for more teachers in Anambra West.

“This initiative is first of its kind and it’s commendable. Supporting education through this initiative will help to boost the morale of children toward education and equally help build their future,’’ she added.

She commended Obiano administration for his giant strides in education, appealing for more educational personnel in the state.

Mr Okwudili Nwadiogbu, a class teacher, on his part, thanked the lawmaker for his generosity.

He said that such a gesture would go a long way to improve the standard of education in the area.