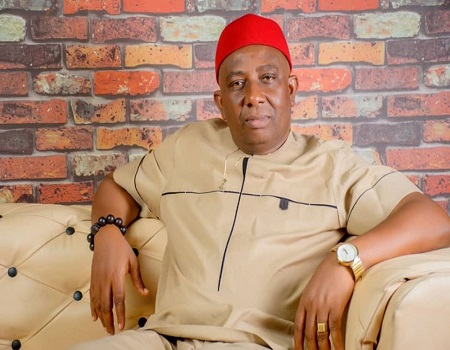 The lawmaker representing Anambra West in the Anambra State House of Assembly, Hon Patrick Obalum Udoba has distributed two truckloads of cassava stems to his constituents.

Hon Udoba commended the state government for the agricultural revolution, thanking Gov Willie Obiano for creating an enabling environment for farmers in the state to thrive.

Udoba, made the commendation during flag-off of Anambra West farming season at Umueze Anam, on Tuesday.

The House member noted that the gesture was to reduce the stress of the farmers going to nearby communities in search of cassava stems after the flood disasters, promising to make it an annual event.

”After the floodwaters that wreaked havoc in the community, our people have been finding it difficult to access cassava stems; some even go as far as Ayamelum LGA to purchase cassava stems.

“Sometimes the ones released by the government do not arrive in good time for farmers in Anambra West; that is why I have embarked on providing this and in good time for my people,’’ he said.

The lawmaker said he would continue to serve the people to justify the mandate given to him to represent them in the Assembly.

A community leader, Chief Sylvester Okoye described the representation of Mr Udoba as the best, urging the lawmaker to continue with the good work.

“I want to commend Hon Udoba for this great initiative and express my appreciation.

” I assure you that people of Anambra West will continue to pray for you,’’ Okoye added.

Some of the beneficiaries, who spoke with Tribune Online, thanked the lawmaker for the stems, saying he demonstrated true leadership with his kind gesture.