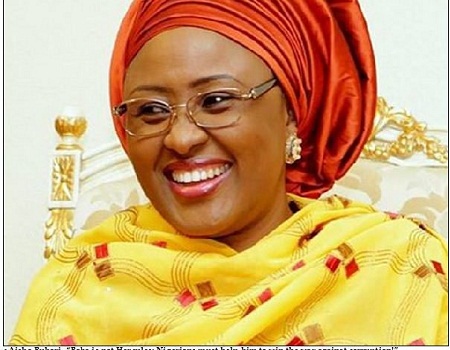 THE Aide-De-Camp (ADC), to the wife of President Muhammadu Buhari, Aisha Buhari, Chief Superintendent of Police, CSP Sani Baba-Inna is now being held by the Department of the State Services, DSS, over alleged N2.5 billion.

A competent security source told The Nigerian Tribune in Abuja yesterday that the matter was initially reported to the Police last week by the wife of the President personally who ordered his arrest.

According to the source, in her complaint, Aisha alleged that the embattled ADC received huge donations from politicians and business people on her behalf and then kept the cash to himself without her knowledge which amounted to N2.5billion.

The Source revealed that consequent upon the discovery of the alleged, the first lady  requested the Inspector General of Police, Ibrahim Idris, to arrest and compel the ADC to account for money immediately

It was gathered that upon the receipt of the report, the Inspector General of Police directed his special squad to carry out the Presidential assignment which prompted the arrest of the ADC and was confronted with the allegation from her principal.

According to a source at the Force Headquarters, Abuja. “the IGP said the matter must be investigated immediately and the house of the ADC was searched  but surprisingly only N1,200 cash was found n the House

“His bank account was also investigated and had only a balance of N30,000 while the transaction records showed that most credits to the account were his salaries and allowances

“Thereafter, the police contacted those named as donors of the controversial funds but that they all denied making the donations attributed to them

“For instance, one of those named was the IGP  himself,” but the IGP said he has never passed any money through the ADC to the Presidency “.

Our source stated that when the finding was made known to the Presidency, the wife of the President was said to have suspected a foul play on the part of the Police and directed that the embattled ADC be handed over to the DSS for further thorough investigation.

The source stated that in strict compliance with the directive, the  IGP directed his squad to hands off the matter and handled over the ADC to the DSS and had since remained in the protective custody of the Service

When contacted, the spokesperson for the DSS, Peter Afunanya said that he was attending a meeting but a superior officer simply told the Nigerian Tribune “yes, the ADC to the wife of the Mr President,  Mr Baba-Inna’s is in our custody, he was handed out to the Agency by the Police over a case of alleged fraud in the Villa, Asoroko”.

Also, efforts to reach the spokesperson of the Nigeria Police Force, DCP, Jimoh Moshood, proved abortive but one of the Senior Police Officers familiar with the case confirmed the incident.

JUST IN: Another death in Aso Rock as Aisha Buhari loses protocol officer