After 19 years of childlessness, couple welcomes triplets with mixed feelings

Features
By Bioluwatife Akinyemi On Aug 16, 2022 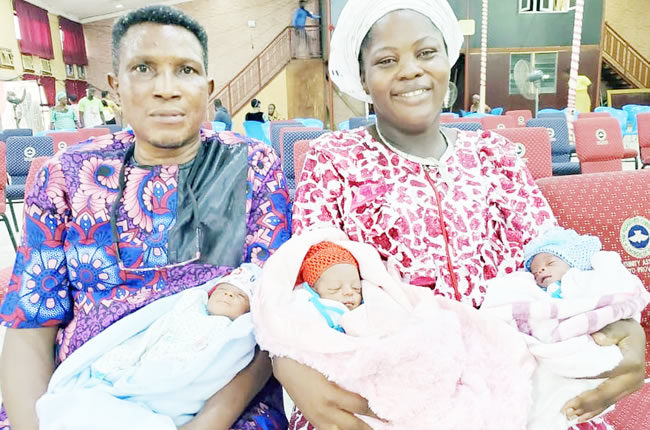 Nineteen years after walking Mary down the aisle, 58-year-old Steven Lawal Adegbenro recounted the challenges he and his 45-year-old wife encountered when it began to appear as a Herculean task for them to bear and raise a child of their own.

Attributing the birth of the triplets (a male and two females) named Joshua, Great and Greatness to providence and efforts of the family doctor through an alternative medical approach, the couple spoke on their journey from marriage to early parenthood.

“In line with our tradition, couples like us are always advised to try another marriage. I was advised to marry another woman while she was also advised to file a divorce and marry someone else, but the love we’ve had for ourselves all along made us decide that we were not going to leave each other. As a matter of fact, being a Christian, I never cheated on my wife.

“In fact, we tried to adopt a child three years ago when the pressure was becoming unbearable. I conceived the idea with the hope of birthing children someday, while raising an orphan but I changed my mind along the line.

“We wished we had someone who could have taken us to ‘Daddy G.O’,  Pastor E.A. Adeboye for prayers. We have been in RCCG Oyo 13 for more than twelve years. While my wife works in the sanitation unit, I serve in the security and ushering unit,” he said.

Speaking on her experience, the mother of the triplets stated that: “I work in RCCG Oyo Province 13 headquarters as a cleaner and a teacher in the children section. I feed and babysit church members’ kids. Being a hairdresser, I made hair for people’s daughters freely because I believed in that process God would bless me with the fruit of the womb because the recipients of my gesture always prayed for me. And as God would have it, I didn’t get to know on time that I was pregnant. My in-laws love me; they didn’t despise me during my years of childlessness.”

Steven and Mary settled for IVF after years of waiting, despite being (Stephen) tested twice for a low sperm count.

“We spent over two million naira on IVF. We had donors from around, who we are eternally grateful to,” the couple chorused.

“I went for a lot of diagnostic tests but I was confirmed to have a low sperm count at two different hospitals within a 10-year interval. The last test I had was in 2016. I had to ignore the results since the medication doctors prescribed for me didn’t work,” Steven said.

Speaking about the pregnancy period, Steven hinted that with the help of ultrasound scan, they confirmed that Mary was “carrying three fetuses in the first month of the journey”. He added that he “resigned from work to take care of Mary as there was no help to stay with her during pregnancy because she could barely walk without assistance”.

Describing how delighted she is, seeing Mary, who she described as her first daughter, delivered of triplets, Asebe, Mary’s mother, spoke on how thankful she is, considering the duration of the waiting period.

However, she confirmed how she advised her daughter to walk out of the marriage on several occasions.

“I specifically told her to walk out of the marriage when it was taking too long, but she refused. I was never in support of their union as a couple from the outset. I didn’t want her to marry a Yoruba man. She is my first daughter. I had preferred to marry her out to an Edo man. I stood against their union but I was praying on my own for her to conceive, and I’m grateful that God has answered my prayers,” Steven’s mother-in-law said.

‘We need help to raise these triplets’

Speaking on how incapacitated they are financially and how they will want well-meaning Nigerians to come to their aid, Steven said, “If I had been assisted as a child, I would have gone far academically. I don’t want my children to face the same situation. My wife and I are pleading with people to help us raise these children and then give them solid education. We solicit financial and moral support from well-meaning Nigerians.”

Presidential fertiliser initiative has failed, should be disbanded- Fertiliser producers

‘I was excited. I was terrified. I was hopeful. It was a heady mix of feelings’